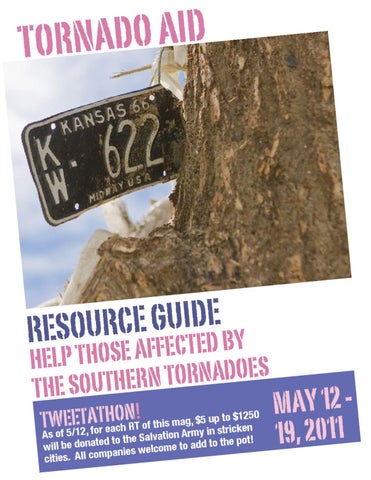 In April &amp; May, the US Suffered Its Deadliest Tornado Outbreak in 86 Years. . . as depicted on the google earth map above. The South suffered the greatest loss: Georgia, Alabama, Tennessee, Mississippi, Arkansas &amp; Missouri. Over 100 tornadoes leaving thousands homeless and over 340 fatalities. With flooding imminent. This tragedy (&amp; being from the South) motivated me to create this guide to the myriad of ways you can help those in need. Money is one way, but there are so many other things we can do. Donate clothing, household goods, give blood, help rebuild. The complete list of organizations &amp; contacts follows. We encourage you to share this guide with friends, family, on twitter, facebook, linked in, etc. You can even add it to your websiteâ&amp;#x20AC;&amp;#x2122;s sidebar with the embed code. Join us as we keep the welfare and health of those affected in our thoughts and hearts &amp; send well wishes their way.

Dear Friends The outpouring of support for our great state of Alabama during the recent aftermath of devastating weather has been nothing short of breathtaking. After surveying the damage left by tornadoes that ravaged the area, it wasn&#39;t difficult to wonder if the lives of so many of our neighbors could ever return to some sense of normal. The Cupboards family was so blessed and is so fortunate to not have been directly hit by the brunt of this savage weather. While we weren&#39;t hit, towns just a short drive away from home and work are now faced with vast amounts of damage and citizens without homes and jobs. The local Alabama family has pulled together to help our neighbors- some municipalities are now turning volunteers away! How awesome it is to see our local communities setting aside differences to help our neighbors!? Much attention has been given to the Tuscaloosa, Alabama area. While Tuscaloosa is perhaps the most densely populated area that was so deeply affected, so many small towns and communities across the state and southeast were damaged and even wiped off the map. My daily commute takes me through one of the damaged areas and the sights are overwhelming. From my commute, one can see more businesses damaged/destroyed than homes. While it may be comforting that someone&#39;s home could have been spared, they may now be out of a job. Alabamians, Southerners and Americans are not a people to be downtrodden. The road to recovery in Alabama will be long, and grieving for those lost will not be easy or quick. Those whose lives were radically changed during the storms will rebuild with the encouragement and assistance of their neighbors locally and across the nation. A simple &quot;Thank you&quot; will never be enough to express the gratitude for the support, thoughts and prayers by so many around the country and world. The efforts of this project are even more reassurance that we still live in the best country on earth. We lift each other up, even in the darkest of times. I hope that you&#39;ll seriously consider supporting your neighbors in Alabama. There is still a need for help. There are still ways that you can help. Come see us- we&#39;ll always have a glass of sweet tea with your name on it! Thanks again, Nick Lovelady, Sylacauga, AL

&quot;These last 2 weeks have been crazy. When they were reporting the tornados were getting close to our area I really didn&#39;t believe it would happen, not Ringgold, Georgia! The tornado hit within a mile of my house, fortunately we were spared! It wasn&#39;t until I saw the devastation for my own eyes that i truly believed what had happened. My little community was ripped apart. The local middle &amp; high school, the local grocery store, gas stations and most all of our fast food eateries are gone. I am so proud of our community! It has been amazing to watch God work through all of us as we pull together to over come this catastrophe. Through my church (Ringgold United Methodist) we have helped serve 13,629 meals, tarped over 125 roofs, removed debris from over 300 homes, cut down so many trees we have lost count, 3,264 volunteers have provided 32,112 man hours of free labor and over 40 shut-ins have been visited &amp; brought food daily. As of this Friday we move from First Response to Planning and Rebuilding. Please keep our community in your thoughts and prayers as we move forward we have a long way to go!&quot; Peace.....Sandy

May 9, 2011 As I woke up to sirens going off early in the morning of April 27, 2011, little did I know this day would become one forever embedded into the hearts of Alabamians. The damage and destruction throughout our state changed us dramatically. I did not think much of the warning as my husband said the tornado was far from us. It is common for us in Alabama to have tornados this time of year, and honestly, unless I know it is close by, I do not think twice. Not anymore. Later I found out the straight-line winds, some as strong as 100 mph, did great damage to areas close by. Even though trees were down all around me and our power was out, my children went to school. As the day wore on, we learned more severe tornados were headed our way. Schools dismissed early and the workplaces that did open, which were not many, closed to allow employees to go home. Thanks goodness for modern technology as forecasters warned us what was coming in the late afternoon was going to be like some we had never experienced. I live in Birmingham, AL, but I grew up an hour away in Tuscaloosa, home of The University of Alabama and Bear Bryant. My father is a Yankee who came to Alabama to play basketball with the famed Rocket Eight, met my mother, and they made Tuscaloosa their home. I am one of five children, and am fortunate to have a wonderful, tight knit family. My parents and one of my sisters (with her husband and daughter) still live in Tuscaloosa, so the roads between the two cities are well worn for us. Late that afternoon, I hunkered down with my children in our “safe place” to watch the storms. I became more and more concerned for my family in Tuscaloosa as tornados, some as strong as F4s, were headed directly for them. I tried to call them, and all landlines and cell phones were out. After much futile effort, my other three siblings and I began texting crazily between each other to see if anyone had heard from our family in Tuscaloosa. Thank goodness for social media as my sister was able to ask on Facebook if our family’s neighborhoods were okay. Though we could not get in touch with my parents for 24 hours (friends did check on them for us), we knew they were okay as the storm did not affect their area of town. My sister and her family were a different story.

May 9, 2011 Mary Kathryn and her family live in a beautiful, older neighborhood in the middle of town called The Highlands, where the trees are a couple of hundred years old. She and her neighbors took the warnings seriously, and she and her family hunkered down into the cellar in her basement. During the tornado, Mary Kathryn describes hearing trees fall as the entire house was shaking. She could feel the back of her home being pulled off. With her teenage daughter crying and her praying, there is no doubt in my mind someone was watching over them. After the storm passed, she could barely walk out of her home due to the trees, power poles, and power lines everywhere. Even with the damage to her home, Mary Kathryn was one of the fortunate ones, as it looked like a bomb had gone off around her. Trees were everywhere, furniture was pulled out from the backs of houses, window blown out, etcâ&amp;#x20AC;Ś If the tornado touched down like it did 1/8 mile from her, her home and neighborsâ&amp;#x20AC;&amp;#x2122; would be rubble. As I drive around the town I love, I am saddened by the devastation. You can drive down a street and all you will see is debris. The death toll is not final and the property destruction assessment is still not complete. So many have lost everything while others are still looking for loved ones. Yet, Tuscaloosa is not the only area affected in our state by these storms. The damage was great and widespread. Many small towns, such as Cullman, Phil Campbell, and Pratt City, have lost lives and so much as well. It will take years to rebuild these areas, but there is no doubt in my mind our state will come back stronger than ever. I was amazed when volunteering in Tuscaloosa at the generosity of others. If you think goodness is lost these days, go to an affected area of this storm. People are driving up with truckloads of bottled water and people from across the country are helping complete strangers with their needs. This will not be fixed overnight, but with the help of others, it is on its way. Dana Wolter, Birmingham, AL

The American Red Cross has set up shelters to

house people displaced by the storms. It is

designate ” funds to the April

is providing food, drinks and

The Alabama Governor’s Office of Faith-based The governor’s office created the fund to help and Community Initiatives helps residents,

business and organizations in the event of

extreme emergency. You can also volunteer - visit servealabama.gov to find out how.

How to help those affected by the Southern tornado outbreak no matter where you live. 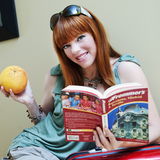