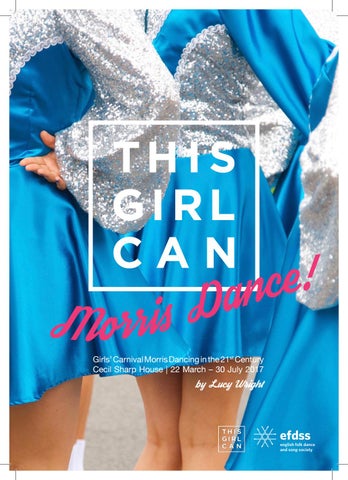 Girls’ morris dancing—sometimes called ‘fluffy’ or ‘carnival’ morris dancing—is a highly competitive team dance from the Northwest of England, which shares a name—but little else at first glance—with the better-known morris traditions performed across the UK. However, girls’ morris dancing has a long and under-recognised history, arguably traceable at least as far as the 1860s. It was integral to the popular town carnival movement—often performed alongside North West morris sides—until the 1990s when the performance was moved indoors, leaving the street parades and civic recreational ground for sports halls and community centres. Morris dancing historian, Roy Dommett described the performance as ‘heir to the richest of the English dance traditions’. However, despite an estimated 8000 girls and women involved, this modern tradition is now rarely seen in public. This exhibition by Lucy Wright draws on more than three years of research in the carnival morris dancing community. Focusing in particular on Orcadia Morris Dancers from Skelmersdale in West Lancashire, her photo series reveals ‘behind-the-scenes’ at a morris dancing competition: the End of Season championships of the English Town and Country Carnival Organisation (ETACCO), held annually in Southport. Also demonstrating the place of girls’ morris dancing within a wider community of carnival performance—including ‘entertaining’ troupes and ‘jazz’ marching (kazoo) bands—contemporary photographs are juxtaposed with archival images to reveal an alternative history of female participation in morris dancing and celebrate the vibrance and diversity of contemporary English folk dance.

Girls’ morris dancing is characterised by precise, synchronous footwork and complex formations performed to recorded pop music. Although few girls’ morris dancers self-identify with the term, ‘folk’, the historical relationships between carnival morris and other forms of North West morris dancing can be recognised—amongst other things—in the bells worn on their shoes and the stylised ‘pas-debasque’ step performed throughout the routines.

Orcadia Morris Dancers (formerly Ormskirk Morris Dancers) from Skelmersdale in West Lancashire were established in 1982. Katie (left) is the current Leader of the ‘Senior Stars’ line, and Tayla (right) dances with the ‘Babies’.

It is sometimes suggested that the participation of girls and young women in morris dancing was directly attributable to the effects of the First World War, however, this image taken in Ormskirk in 1905—one of many photographs of girls’ morris troupes from the 1900s onwards—demonstrates that female morris dancers were a feature of Northwest street parades long before then. Goostrey Morris Dancers (circa. 1923-25) 

Goostrey Morris Dancers from Cheshire were amongst the last ‘mixed’ troupes to compete in competitions with all-female carnival morris dancers. Growing out of the all-male Goostrey side (recorded in 1907), the mixed team performed from the 1920s to the 1950s, winning many competitions at carnivals in Cheshire and Lancashire. Both photographs are reproduced with kind permission of The Morris Ring Archive.

At the End of Season Championships, all troupes who have qualified during the season come together to compete a final time for the coveted top spot. The English Town and Country Carnival Organisation was founded in 1974, and is one of many morris dancing organisations in Lancashire, Merseyside and North Wales.

Girls’ morris dancers carry pom-poms or ‘shakers,’ which are used to create precise, punchy arm movements. Shakers were originally handmade from tissue or crepe paper, but were later crafted from carrier bags and holographic plastic. The shakers on display include examples of home-made carrierbag shakers as well as commercially-produced pom-poms sourced from cheerleading suppliers. With thanks to Samantha Hamer (Orcadia Morris Dancers), Susan Wilde (Platt Bridge Morris Dancers) and Wendy Lewis (Hag Fold Morris Dancers) for the loan of the shakers.  Mobberley Morris Dancers (circa. mid-1920s.)

Both photographs are reproduced with kind permission of The Morris Ring Archive.

Appearance is paramount in girlsâ&amp;#x20AC;&amp;#x2122; morris dancing, and performers are judged on the uniformity of their costume as well as the precision and originality of the stepping. Costumes are required to include matching headbands, socks, and white pumps with bells Sadie and Emma (2016) ď&amp;#x201A;&amp;#x201A;

Medals are awarded for success in competitions and for teamwork and attendance. Sadie and Emma, members of Orcadia Dinkies, proudly show off their waistcoats full of medals, worn in preparation for the End of Season results ceremony.

Girls’ morris dancing developed predominantly outside of the English folk revival, however, it formed an important part of the town carnival movement, alongside entertaining troupes, majorette baton-twirlers and ‘jazz’ (kazoo) marching bands.

‘Jazz’ marching bands combine musical performance (including percussion and kazoos) and highly formalised choreographies, that were once integral to the carnival street parades in the Northeast, Midlands and South Wales, as well as the Northwest. In 2016, Shildon Jubilees were the winners of the UK Federation of Jazz Bands (UKFJB) End of Season championships, held in Newcastle-upon-Tyne. Lightwood Crystals (2015) 

Entertaining troupes—also a key feature of the town carnival movement—perform highly synchronised routines incorporating high kicks and vertiginous human pyramids. Mostly found in Staffordshire, Derbyshire and Greater Manchester, this photograph of Lightwood Crystals from Stoke-on-Trent was taken in front of the troupe bus, used to convey the dancers to competitions across the region.

This photograph is reproduced permission of Samantha Hamer.

Waistcoats were worn during carnival street parades, and dancers competed to have the most medals on display. A well-covered waistcoat is very heavy, weighing upwards of 5kg.

A selection of morris dancing dresses kindly loaned by Samantha Hamer (Orcadia Morris Dancers) and Susan Wilde (Platt Bridge Morris Dancers). Girls’ morris dresses are replaced annually, or as often as funds allow. In recent years, their designs have become increasingly elaborate, with current preferences for heavily sequinned fabrics which catch the light while performing on the ‘arena’.

Girls’ morris dancing troupes are divided into different ‘lines’ by age and ability. In this photograph, members of Orcadia Juniors (aged 12 to 16) compete at the ETACCO End of Season Championships. In 2016, Orcadia were named Troupe of the Year (TOTY). Orcadia Juniors awaiting results (2016)

Troupes train throughout the year to achieve the highest possible standards. Awaiting the results of an important competition can be nerve-wracking as small errors in footwork or synchronicity can mean the difference between being placed in the top 3 or not. ETACCO End of Season Results Ceremony (2016)

Girls’ morris dancing routines are rechoreographed each year. Here, dancers stand to applaud the success of teammates during the End of Season results ceremony.

A highlight of the End of Season championships is the moment when the trophy display is revealed, accompanied by much fanfare and even indoor fireworks. Successful troupes aim to gather a rafter of trophies at such competitions, awarded both for success during the season and for performance in the final championship event. Lower Withington Cups (circa. 1950s)

Lower Withington Senior Morris Dancers were a mixed morris side from Cheshire, performing during the transition period before carnival morris competitions became (almost) exclusively female. Led by John Ryder in the mid to late 1950s, the troupe won many competitions, as demonstrated in this photograph of their collections of cups.

This photograph is reproduced permission of Dave Middlehurst.

The Franconians at Belle Vue Stadium, Manchester (circa. 1957-8)

In the ‘heyday’ of the town carnival movement (from the 1950s - 1980s) troupes would gather from across the Northwest to take part in largescale competitions and street parades. A popular carnival was held annually at Belle Vue Stadium in Manchester and regularly attracted more than thirty troupes. This photograph was taken by William Heywood and is reproduced with kind permission of Pete Heywood. Orcadia Warm-up (2013)

Orcadia Morris Dancers practice their routine one final time, before stepping onto the competition arena—joined by a ‘surprise’ guest!

Orcadia supporters stand on the sidelines at the ETACCO End of Season Championships to cheer for their team. In addition to the dancers, girls’ morris troupes comprise a very active network of families, friends, trainers and principals. Platt Bridge Seniors (1989)

Platt Bridge Morris Dancers at the Isle of Man (circa. 1980s)

Lucy W right Lucy Wright is an artist and ethnomusicologist, currently based at the University of Sheffield working as Research Associate on the AHRCfunded Digital Folk project. Her primary interests are English folk music and dance—in particular the performance legacy of the ‘town carnival movement’ in the North of England and Wales—and in the relationships between performance and material practice. An advocate for ‘artistic research’ methods, she is currently (Folk) Artist-in-Residence at Bank Street Arts in Sheffield and has exhibited her work as part of KULES at the Airspace Gallery in Stoke-on-Trent and at the People’s History Museum in Manchester. From 2009 to 2016, she toured with the BBC Folk Award-nominated act, Pilgrims’ Way, and continues to perform occasionally with the Wright Family of jews’ harp players. For more information about girls’ morris dancing, and for examples of Lucy’s practice-led research, please visit: www.artistic-researcher.co.uk.

Curated by Lucy Wright and Julia Calver. Presented with the generous support of the University of Sheffield and Arts Enterprise. With gratitude to the English Folk Dance and Song Society, Morris Ring Archive and Living Tradition Archive, and to Sports England for the use of the ‘This Girl Can’ logo. I would also like to thank the following individuals: Samantha Hamer, Susan Wilde, Wendy Lewis, Duncan Broomhead, Pete Heywood, Dave Middlehurst, Simon Keegan-Phipps, Amy Ryall and Tilo Reifenstein. Special thanks to Orcadia Morris Dancers.

Exhibition booklet for 'This Girl Can' Morris Dance, by Lucy Wright, at Cecil Sharp House London. Girls’ morris dancing—sometimes called ‘fluffy’ or ‘carnival’ morris dancing—is a highly competitive team dance from the Northwest of England, which shares a name—but little else at first glance—with the better-known morris traditions performed across the UK. However, girls’ morris dancing has a long and under-recognised history, arguably traceable at least as far as the 1860s. It was integral to the popular town carnival movement—often performed alongside North West morris sides—until the 1990s when the performance was moved indoors, leaving the street parades and civic recreational ground for sports halls and community centres. This photographic exhibition by Lucy Wright draws on more than three years of research in the carnival morris dancing community.