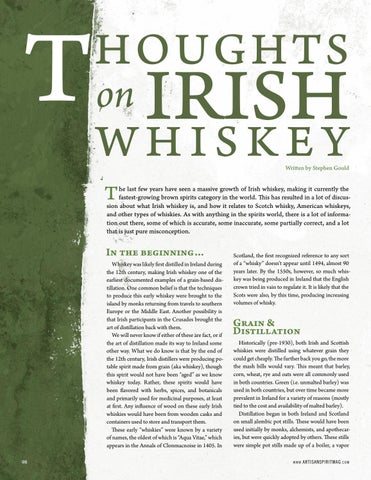 he last few years have seen a massive growth of Irish whiskey, making it currently the fastest-growing brown spirits category in the world. This has resulted in a lot of discussion about what Irish whiskey is, and how it relates to Scotch whisky, American whiskeys, and other types of whiskies. As with anything in the spirits world, there is a lot of information out there, some of which is accurate, some inaccurate, some partially correct, and a lot that is just pure misconception.

In the beginning… Whiskey was likely first distilled in Ireland during the 12th century, making Irish whiskey one of the earliest documented examples of a grain-based distillation. One common belief is that the techniques to produce this early whiskey were brought to the island by monks returning from travels to southern Europe or the Middle East. Another possibility is that Irish participants in the Crusades brought the art of distillation back with them. We will never know if either of these are fact, or if the art of distillation made its way to Ireland some other way. What we do know is that by the end of the 12th century, Irish distillers were producing potable spirit made from grain (aka whiskey), though this spirit would not have been “aged” as we know whiskey today. Rather, these spirits would have been flavored with herbs, spices, and botanicals and primarily used for medicinal purposes, at least at first. Any influence of wood on these early Irish whiskies would have been from wooden casks and containers used to store and transport them. These early “whiskies” were known by a variety of names, the oldest of which is “Aqua Vitae,” which appears in the Annals of Clonmacnoise in 1405. In 98

Scotland, the first recognized reference to any sort of a “whisky” doesn’t appear until 1494, almost 90 years later. By the 1550s, however, so much whiskey was being produced in Ireland that the English crown tried in vain to regulate it. It is likely that the Scots were also, by this time, producing increasing volumes of whisky.

Grain &amp; Distillation Historically (pre-1930), both Irish and Scottish whiskies were distilled using whatever grain they could get cheaply. The further back you go, the more the mash bills would vary. This meant that barley, corn, wheat, rye and oats were all commonly used in both countries. Green (i.e. unmalted barley) was used in both countries, but over time became more prevalent in Ireland for a variety of reasons (mostly tied to the cost and availability of malted barley). Distillation began in both Ireland and Scotland on small alembic pot stills. These would have been used initially by monks, alchemists, and apothecaries, but were quickly adopted by others. These stills were simple pot stills made up of a boiler, a vapor W W W . ARTISANSPIRITMAG . C O M