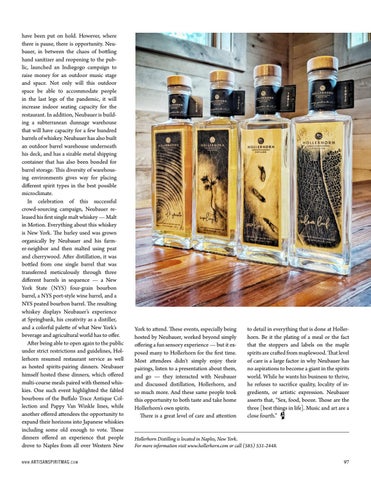 have been put on hold. However, where there is pause, there is opportunity. Neubauer, in between the chaos of bottling hand sanitizer and reopening to the public, launched an Indiegogo campaign to raise money for an outdoor music stage and space. Not only will this outdoor space be able to accommodate people in the last legs of the pandemic, it will increase indoor seating capacity for the restaurant. In addition, Neubauer is building a subterranean dunnage warehouse that will have capacity for a few hundred barrels of whiskey. Neubauer has also built an outdoor barrel warehouse underneath his deck, and has a sizable metal shipping container that has also been bonded for barrel storage. This diversity of warehousing environments gives way for placing different spirit types in the best possible microclimate. In celebration of this successful crowd-sourcing campaign, Neubauer released his first single malt whiskey — Malt in Motion. Everything about this whiskey is New York. The barley used was grown organically by Neubauer and his farmer-neighbor and then malted using peat and cherrywood. After distillation, it was bottled from one single barrel that was transferred meticulously through three different barrels in sequence — a New York State (NYS) four-grain bourbon barrel, a NYS port-style wine barrel, and a NYS peated bourbon barrel. The resulting whiskey displays Neubauer’s experience at Springbank, his creativity as a distiller, and a colorful palette of what New York’s beverage and agricultural world has to offer. After being able to open again to the public under strict restrictions and guidelines, Hollerhorn resumed restaurant service as well as hosted spirits-pairing dinners. Neubauer himself hosted these dinners, which offered multi-course meals paired with themed whiskies. One such event highlighted the fabled bourbons of the Buffalo Trace Antique Collection and Pappy Van Winkle lines, while another offered attendees the opportunity to expand their horizons into Japanese whiskies including some old enough to vote. These dinners offered an experience that people drove to Naples from all over Western New W W W . ARTISANSPIRITMAG . C O M

York to attend. These events, especially being hosted by Neubauer, worked beyond simply offering a fun sensory experience — but it exposed many to Hollerhorn for the first time. Most attendees didn’t simply enjoy their pairings, listen to a presentation about them, and go — they interacted with Neubauer and discussed distillation, Hollerhorn, and so much more. And these same people took this opportunity to both taste and take home Hollerhorn’s own spirits. There is a great level of care and attention

to detail in everything that is done at Hollerhorn. Be it the plating of a meal or the fact that the stoppers and labels on the maple spirits are crafted from maplewood. That level of care is a large factor in why Neubauer has no aspirations to become a giant in the spirits world. While he wants his business to thrive, he refuses to sacrifice quality, locality of ingredients, or artistic expression. Neubauer asserts that, “Sex, food, booze. Those are the three [best things in life]. Music and art are a close fourth.”