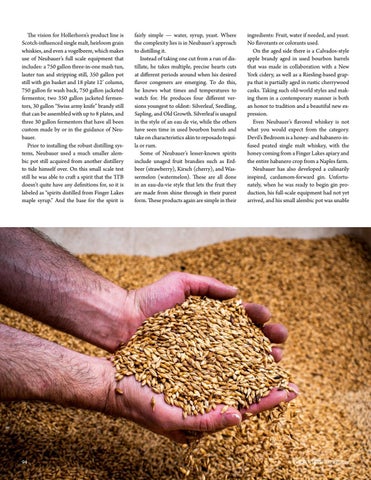 The vision for Hollerhorn’s product line is Scotch-influenced single malt, heirloom grain whiskies, and even a vogelbeere, which makes use of Neubauer’s full scale equipment that includes: a 750 gallon three-in-one mash tun, lauter tun and stripping still, 350 gallon pot still with gin basket and 18 plate 12’ column, 750 gallon fir wash back, 750 gallon jacketed fermentor, two 350 gallon jacketed fermentors, 30 gallon “Swiss army knife” brandy still that can be assembled with up to 8 plates, and three 30 gallon fermentors that have all been custom made by or in the guidance of Neubauer. Prior to installing the robust distilling systems, Neubauer used a much smaller alembic pot still acquired from another distillery to tide himself over. On this small scale test still he was able to craft a spirit that the TTB doesn’t quite have any definitions for, so it is labeled as “spirits distilled from Finger Lakes maple syrup.” And the base for the spirit is

fairly simple — water, syrup, yeast. Where the complexity lies is in Neubauer’s approach to distilling it. Instead of taking one cut from a run of distillate, he takes multiple, precise hearts cuts at different periods around when his desired flavor congeners are emerging. To do this, he knows what times and temperatures to watch for. He produces four different versions youngest to oldest: Silverleaf, Seedling, Sapling, and Old Growth. Silverleaf is unaged in the style of an eau de vie, while the others have seen time in used bourbon barrels and take on characteristics akin to reposado tequila or rum. Some of Neubauer’s lesser-known spirits include unaged fruit brandies such as Erdbeer (strawberry), Kirsch (cherry), and Wassermelon (watermelon). These are all done in an eau-du-vie style that lets the fruit they are made from shine through in their purest form. These products again are simple in their

ingredients: Fruit, water if needed, and yeast. No flavorants or colorants used. On the aged side there is a Calvados-style apple brandy aged in used bourbon barrels that was made in collaboration with a New York cidery, as well as a Riesling-based grappa that is partially aged in rustic cherrywood casks. Taking such old-world styles and making them in a contemporary manner is both an honor to tradition and a beautiful new expression. Even Neubauer’s flavored whiskey is not what you would expect from the category. Devil’s Bedroom is a honey- and habanero-infused peated single malt whiskey, with the honey coming from a Finger Lakes apiary and the entire habanero crop from a Naples farm. Neubauer has also developed a culinarily inspired, cardamom-forward gin. Unfortunately, when he was ready to begin gin production, his full-scale equipment had not yet arrived, and his small alembic pot was unable