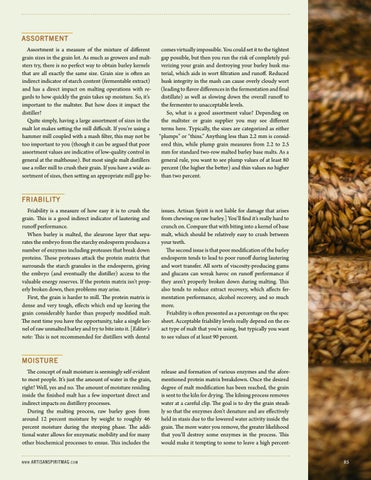 ASSORTMENT Assortment is a measure of the mixture of different grain sizes in the grain lot. As much as growers and maltsters try, there is no perfect way to obtain barley kernels that are all exactly the same size. Grain size is often an indirect indicator of starch content (fermentable extract) and has a direct impact on malting operations with regards to how quickly the grain takes up moisture. So, it’s important to the maltster. But how does it impact the distiller? Quite simply, having a large assortment of sizes in the malt lot makes setting the mill difficult. If you’re using a hammer mill coupled with a mash filter, this may not be too important to you (though it can be argued that poor assortment values are indicative of low-quality control in general at the malthouse). But most single malt distillers use a roller mill to crush their grain. If you have a wide assortment of sizes, then setting an appropriate mill gap be-

comes virtually impossible. You could set it to the tightest gap possible, but then you run the risk of completely pulverizing your grain and destroying your barley husk material, which aids in wort filtration and runoff. Reduced husk integrity in the mash can cause overly cloudy wort (leading to flavor differences in the fermentation and final distillate) as well as slowing down the overall runoff to the fermenter to unacceptable levels. So, what is a good assortment value? Depending on the maltster or grain supplier you may see different terms here. Typically, the sizes are categorized as either “plumps” or “thins.” Anything less than 2.2 mm is considered thin, while plump grain measures from 2.2 to 2.5 mm for standard two-row malted barley base malts. As a general rule, you want to see plump values of at least 80 percent (the higher the better) and thin values no higher than two percent.

FRIABILITY Friability is a measure of how easy it is to crush the grain. This is a good indirect indicator of lautering and runoff performance. When barley is malted, the aleurone layer that separates the embryo from the starchy endosperm produces a number of enzymes including proteases that break down proteins. These proteases attack the protein matrix that surrounds the starch granules in the endosperm, giving the embryo (and eventually the distiller) access to the valuable energy reserves. If the protein matrix isn’t properly broken down, then problems may arise. First, the grain is harder to mill. The protein matrix is dense and very tough, effects which end up leaving the grain considerably harder than properly modified malt. The next time you have the opportunity, take a single kernel of raw unmalted barley and try to bite into it. [Editor’s note: This is not recommended for distillers with dental

issues. Artisan Spirit is not liable for damage that arises from chewing on raw barley.] You’ll find it’s really hard to crunch on. Compare that with biting into a kernel of base malt, which should be relatively easy to crush between your teeth. The second issue is that poor modification of the barley endosperm tends to lead to poor runoff during lautering and wort transfer. All sorts of viscosity-producing gums and glucans can wreak havoc on runoff performance if they aren’t properly broken down during malting. This also tends to reduce extract recovery, which affects fermentation performance, alcohol recovery, and so much more. Friability is often presented as a percentage on the spec sheet. Acceptable friability levels really depend on the exact type of malt that you’re using, but typically you want to see values of at least 90 percent.

MOISTURE The concept of malt moisture is seemingly self-evident to most people. It’s just the amount of water in the grain, right? Well, yes and no. The amount of moisture residing inside the finished malt has a few important direct and indirect impacts on distillery processes. During the malting process, raw barley goes from around 12 percent moisture by weight to roughly 46 percent moisture during the steeping phase. The additional water allows for enzymatic mobility and for many other biochemical processes to ensue. This includes the W W W . ARTISANSPIRITMAG . C O M

release and formation of various enzymes and the aforementioned protein matrix breakdown. Once the desired degree of malt modification has been reached, the grain is sent to the kiln for drying. The kilning process removes water at a careful clip. The goal is to dry the grain steadily so that the enzymes don’t denature and are effectively held in stasis due to the lowered water activity inside the grain. The more water you remove, the greater likelihood that you’ll destroy some enzymes in the process. This would make it tempting to some to leave a high percent85