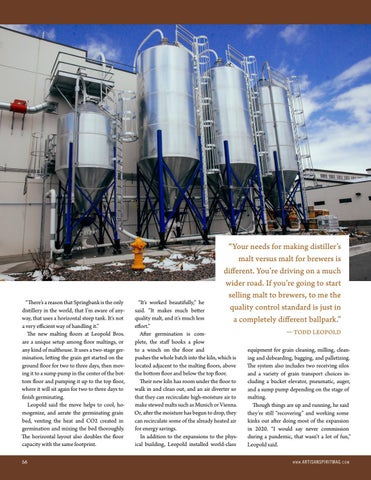 “There’s a reason that Springbank is the only distillery in the world, that I’m aware of anyway, that uses a horizontal steep tank. It&#39;s not a very efficient way of handling it.” The new malting floors at Leopold Bros. are a unique setup among floor maltings, or any kind of malthouse. It uses a two-stage germination, letting the grain get started on the ground floor for two to three days, then moving it to a sump pump in the center of the bottom floor and pumping it up to the top floor, where it will sit again for two to three days to finish germinating. Leopold said the move helps to cool, homogenize, and aerate the germinating grain bed, venting the heat and CO2 created in germination and mixing the bed thoroughly. The horizontal layout also doubles the floor capacity with the same footprint. 56

“Your needs for making distiller’s malt versus malt for brewers is different. You’re driving on a much wider road. If you’re going to start selling malt to brewers, to me the quality control standard is just in a completely different ballpark.”

“It’s worked beautifully,” he said. “It makes much better quality malt, and it’s much less effort.” After germination is complete, the staff hooks a plow to a winch on the floor and pushes the whole batch into the kiln, which is located adjacent to the malting floors, above the bottom floor and below the top floor. Their new kiln has room under the floor to walk in and clean out, and an air diverter so that they can recirculate high-moisture air to make stewed malts such as Munich or Vienna. Or, after the moisture has begun to drop, they can recirculate some of the already heated air for energy savings. In addition to the expansions to the physical building, Leopold installed world-class

— TODD LEOPOLD equipment for grain cleaning, milling, cleaning and debearding, bagging, and palletizing. The system also includes two receiving silos and a variety of grain transport choices including a bucket elevator, pneumatic, auger, and a sump pump depending on the stage of malting. Though things are up and running, he said they’re still “recovering” and working some kinks out after doing most of the expansion in 2020. “I would say never commission during a pandemic, that wasn’t a lot of fun,” Leopold said. W W W . ARTISANSPIRITMAG . C O M