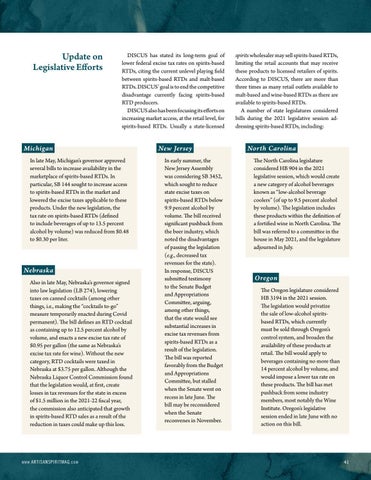 Nebraska Also in late May, Nebraska’s governor signed into law legislation (LB 274), lowering taxes on canned cocktails (among other things, i.e., making the “cocktails to-go” measure temporarily enacted during Covid permanent). The bill defines an RTD cocktail as containing up to 12.5 percent alcohol by volume, and enacts a new excise tax rate of $0.95 per gallon (the same as Nebraska’s excise tax rate for wine). Without the new category, RTD cocktails were taxed in Nebraska at $3.75 per gallon. Although the Nebraska Liquor Control Commission found that the legislation would, at first, create losses in tax revenues for the state in excess of $1.5 million in the 2021-22 fiscal year, the commission also anticipated that growth in spirits-based RTD sales as a result of the reduction in taxes could make up this loss.

In early summer, the New Jersey Assembly was considering SB 3452, which sought to reduce state excise taxes on spirits-based RTDs below 9.9 percent alcohol by volume. The bill received significant pushback from the beer industry, which noted the disadvantages of passing the legislation (e.g., decreased tax revenues for the state). In response, DISCUS submitted testimony to the Senate Budget and Appropriations Committee, arguing, among other things, that the state would see substantial increases in excise tax revenues from spirits-based RTDs as a result of the legislation. The bill was reported favorably from the Budget and Appropriations Committee, but stalled when the Senate went on recess in late June. The bill may be reconsidered when the Senate reconvenes in November.

Oregon The Oregon legislature considered HB 3194 in the 2021 session. The legislation would privatize the sale of low-alcohol spiritsbased RTDs, which currently must be sold through Oregon’s control system, and broaden the availability of these products at retail. The bill would apply to beverages containing no more than 14 percent alcohol by volume, and would impose a lower tax rate on these products. The bill has met pushback from some industry members, most notably the Wine Institute. Oregon’s legislative session ended in late June with no action on this bill.