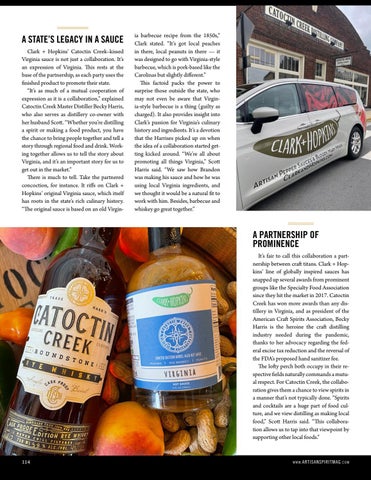 A STATE’S LEGACY IN A SAUCE Clark + Hopkins’ Catoctin Creek–kissed Virginia sauce is not just a collaboration. It’s an expression of Virginia. This rests at the base of the partnership, as each party uses the finished product to promote their state. “It’s as much of a mutual cooperation of expression as it is a collaboration,” explained Catoctin Creek Master Distiller Becky Harris, who also serves as distillery co-owner with her husband Scott. “Whether you’re distilling a spirit or making a food product, you have the chance to bring people together and tell a story through regional food and drink. Working together allows us to tell the story about Virginia, and it’s an important story for us to get out in the market.” There is much to tell. Take the partnered concoction, for instance. It riffs on Clark + Hopkins’ original Virginia sauce, which itself has roots in the state’s rich culinary history. “The original sauce is based on an old Virgin-

ia barbecue recipe from the 1850s,” Clark stated. “It’s got local peaches in there, local peanuts in there — it was designed to go with Virginia-style barbecue, which is pork-based like the Carolinas but slightly different.” This factoid packs the power to surprise those outside the state, who may not even be aware that Virginia-style barbecue is a thing (guilty as charged). It also provides insight into Clark’s passion for Virginia’s culinary history and ingredients. It’s a devotion that the Harrises picked up on when the idea of a collaboration started getting kicked around. “We’re all about promoting all things Virginia,” Scott Harris said. “We saw how Brandon was making his sauce and how he was using local Virginia ingredients, and we thought it would be a natural fit to work with him. Besides, barbecue and whiskey go great together.”

A PARTNERSHIP OF PROMINENCE It’s fair to call this collaboration a partnership between craft titans. Clark + Hopkins’ line of globally inspired sauces has snapped up several awards from prominent groups like the Specialty Food Association since they hit the market in 2017. Catoctin Creek has won more awards than any distillery in Virginia, and as president of the American Craft Spirits Association, Becky Harris is the heroine the craft distilling industry needed during the pandemic, thanks to her advocacy regarding the federal excise tax reduction and the reversal of the FDA’s proposed hand sanitizer fee. The lofty perch both occupy in their respective fields naturally commands a mutual respect. For Catoctin Creek, the collaboration gives them a chance to view spirits in a manner that’s not typically done. “Spirits and cocktails are a huge part of food culture, and we view distilling as making local food,” Scott Harris said. “This collaboration allows us to tap into that viewpoint by supporting other local foods.”