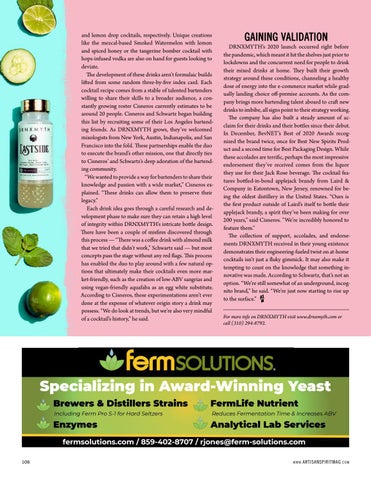 and lemon drop cocktails, respectively. Unique creations like the mezcal-based Smoked Watermelon with lemon and spiced honey or the tangerine bomber cocktail with hops-infused vodka are also on hand for guests looking to deviate. The development of these drinks aren’t formulaic builds lifted from some random three-by-five index card. Each cocktail recipe comes from a stable of talented bartenders willing to share their skills to a broader audience, a constantly growing roster Cisneros currently estimates to be around 20 people. Cisneros and Schwartz began building this list by recruiting some of their Los Angeles bartending friends. As DRNXMYTH grows, they’ve welcomed mixologists from New York, Austin, Indianapolis, and San Francisco into the fold. These partnerships enable the duo to execute the brand’s other mission, one that directly ties to Cisneros’ and Schwartz’s deep adoration of the bartending community. “We wanted to provide a way for bartenders to share their knowledge and passion with a wide market,” Cisneros explained. “These drinks can allow them to preserve their legacy.” Each drink idea goes through a careful research and development phase to make sure they can retain a high level of integrity within DRNXMYTH’s intricate bottle design. There have been a couple of misfires discovered through this process — “There was a coffee drink with almond milk that we tried that didn’t work,” Schwartz said — but most concepts pass the stage without any red flags. This process has enabled the duo to play around with a few natural options that ultimately make their cocktails even more market-friendly, such as the creation of low-ABV sangrias and using vegan-friendly aquafaba as an egg white substitute. According to Cisneros, these experimentations aren’t ever done at the expense of whatever origin story a drink may possess. “We do look at trends, but we’re also very mindful of a cocktail’s history,” he said.

GAINING VALIDATION DRNXMYTH’s 2020 launch occurred right before the pandemic, which meant it hit the shelves just prior to lockdowns and the concurrent need for people to drink their mixed drinks at home. They built their growth strategy around these conditions, channeling a healthy dose of energy into the e-commerce market while gradually landing choice off-premise accounts. As the company brings more bartending talent aboard to craft new drinks to imbibe, all signs point to their strategy working. The company has also built a steady amount of acclaim for their drinks and their bottles since their debut. In December, BevNET’s Best of 2020 Awards recognized the brand twice, once for Best New Spirits Product and a second time for Best Packaging Design. While these accolades are terrific, perhaps the most impressive endorsement they’ve received comes from the liquor they use for their Jack Rose beverage. The cocktail features bottled-in-bond applejack brandy from Laird &amp; Company in Eatontown, New Jersey, renowned for being the oldest distillery in the United States. “Ours is the first product outside of Laird’s itself to bottle their applejack brandy, a spirit they’ve been making for over 200 years,” said Cisneros. “We’re incredibly honored to feature them.” The collection of support, accolades, and endorsements DRNXMYTH received in their young existence demonstrates their engineering-fueled twist on at-home cocktails isn’t just a fluky gimmick. It may also make it tempting to coast on the knowledge that something innovative was made. According to Schwartz, that’s not an option. “We’re still somewhat of an underground, incognito brand,” he said. “We’re just now starting to rise up to the surface.” For more info on DRNXMYTH visit www.drnxmyth.com or call (310) 294-8792.