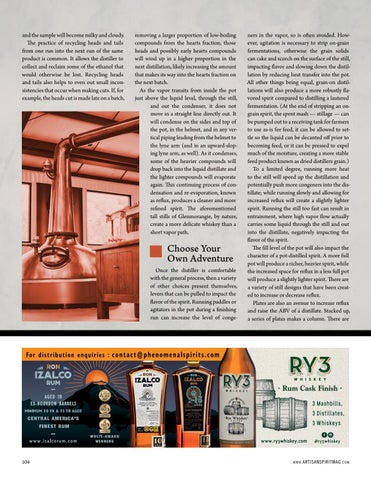 and the sample will become milky and cloudy. The practice of recycling heads and tails from one run into the next run of the same product is common. It allows the distiller to collect and reclaim some of the ethanol that would otherwise be lost. Recycling heads and tails also helps to even out small inconsistencies that occur when making cuts. If, for example, the heads cut is made late on a batch,

removing a larger proportion of low-boiling compounds from the hearts fraction, those heads and possibly early hearts compounds will wind up in a higher proportion in the next distillation, likely increasing the amount that makes its way into the hearts fraction on the next batch. As the vapor transits from inside the pot just above the liquid level, through the still, and out the condenser, it does not move in a straight line directly out. It will condense on the sides and top of the pot, in the helmet, and in any vertical piping leading from the helmet to the lyne arm (and in an upward-sloping lyne arm, as well). As it condenses, some of the heavier compounds will drop back into the liquid distillate and the lighter compounds will evaporate again. This continuing process of condensation and re-evaporation, known as reflux, produces a cleaner and more refined spirit. The aforementioned tall stills of Glenmorangie, by nature, create a more delicate whiskey than a short vapor path.

Choose Your Own Adventure Once the distiller is comfortable with the general process, then a variety of other choices present themselves, levers that can be pulled to impact the flavor of the spirit. Running paddles or agitators in the pot during a finishing run can increase the level of conge-

ners in the vapor, so is often avoided. However, agitation is necessary to strip on-grain fermentations, otherwise the grain solids can cake and scorch on the surface of the still, impacting flavor and slowing down the distillation by reducing heat transfer into the pot. All other things being equal, grain-on distillations will also produce a more robustly flavored spirit compared to distilling a lautered fermentation. (At the end of stripping an ongrain spirit, the spent mash — stillage — can be pumped out to a receiving tank for farmers to use as-is for feed, it can be allowed to settle so the liquid can be decanted off prior to becoming feed, or it can be pressed to expel much of the moisture, creating a more stable feed product known as dried distillers grain.) To a limited degree, running more heat to the still will speed up the distillation and potentially push more congeners into the distillate; while running slowly and allowing for increased reflux will create a slightly lighter spirit. Running the still too fast can result in entrainment, where high vapor flow actually carries some liquid through the still and out into the distillate, negatively impacting the flavor of the spirit. The fill level of the pot will also impact the character of a pot-distilled spirit. A more full pot will produce a richer, heavier spirit, while the increased space for reflux in a less full pot will produce a slightly lighter spirit. There are a variety of still designs that have been created to increase or decrease reflux. Plates are also an avenue to increase reflux and raise the ABV of a distillate. Stacked up, a series of plates makes a column. There are