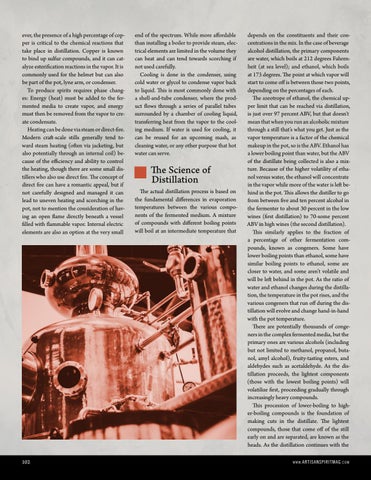 ever, the presence of a high percentage of copper is critical to the chemical reactions that take place in distillation. Copper is known to bind up sulfur compounds, and it can catalyze esterification reactions in the vapor. It is commonly used for the helmet but can also be part of the pot, lyne arm, or condenser. To produce spirits requires phase changes: Energy (heat) must be added to the fermented media to create vapor, and energy must then be removed from the vapor to create condensate. Heating can be done via steam or direct-fire. Modern craft-scale stills generally tend toward steam heating (often via jacketing, but also potentially through an internal coil) because of the efficiency and ability to control the heating, though there are some small distillers who also use direct fire. The concept of direct fire can have a romantic appeal, but if not carefully designed and managed it can lead to uneven heating and scorching in the pot, not to mention the consideration of having an open flame directly beneath a vessel filled with flammable vapor. Internal electric elements are also an option at the very small

end of the spectrum. While more affordable than installing a boiler to provide steam, electrical elements are limited in the volume they can heat and can tend towards scorching if not used carefully. Cooling is done in the condenser, using cold water or glycol to condense vapor back to liquid. This is most commonly done with a shell-and-tube condenser, where the product flows through a series of parallel tubes surrounded by a chamber of cooling liquid, transferring heat from the vapor to the cooling medium. If water is used for cooling, it can be reused for an upcoming mash, as cleaning water, or any other purpose that hot water can serve.

The Science of Distillation The actual distillation process is based on the fundamental differences in evaporation temperatures between the various components of the fermented medium. A mixture of compounds with different boiling points will boil at an intermediate temperature that

depends on the constituents and their concentrations in the mix. In the case of beverage alcohol distillation, the primary components are water, which boils at 212 degrees Fahrenheit (at sea level); and ethanol, which boils at 173 degrees. The point at which vapor will start to come off is between those two points, depending on the percentages of each. The azeotrope of ethanol, the chemical upper limit that can be reached via distillation, is just over 97 percent ABV, but that doesn’t mean that when you run an alcoholic mixture through a still that’s what you get. Just as the vapor temperature is a factor of the chemical makeup in the pot, so is the ABV. Ethanol has a lower boiling point than water, but the ABV of the distillate being collected is also a mixture. Because of the higher volatility of ethanol versus water, the ethanol will concentrate in the vapor while more of the water is left behind in the pot. This allows the distiller to go from between five and ten percent alcohol in the fermenter to about 30 percent in the low wines (first distillation) to 70-some percent ABV in high wines (the second distillation). This similarly applies to the fraction of a percentage of other fermentation compounds, known as congeners. Some have lower boiling points than ethanol, some have similar boiling points to ethanol, some are closer to water, and some aren’t volatile and will be left behind in the pot. As the ratio of water and ethanol changes during the distillation, the temperature in the pot rises, and the various congeners that run off during the distillation will evolve and change hand-in-hand with the pot temperature. There are potentially thousands of congeners in the complex fermented media, but the primary ones are various alcohols (including but not limited to methanol, propanol, butanol, amyl alcohol), fruity-tasting esters, and aldehydes such as acetaldehyde. As the distillation proceeds, the lightest components (those with the lowest boiling points) will volatilize first, proceeding gradually through increasingly heavy compounds. This procession of lower-boiling to higher-boiling compounds is the foundation of making cuts in the distillate. The lightest compounds, those that come off of the still early on and are separated, are known as the heads. As the distillation continues with the W W W . ARTISANSPIRITMAG . C O M