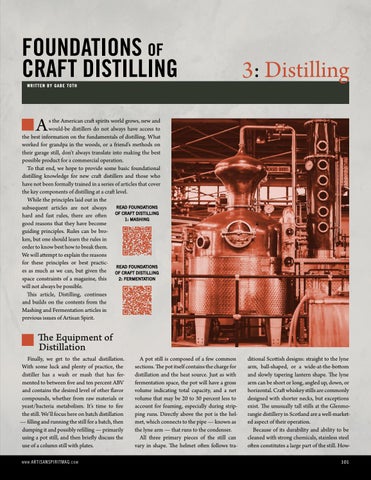 s the American craft spirits world grows, new and would-be distillers do not always have access to the best information on the fundamentals of distilling. What worked for grandpa in the woods, or a friend’s methods on their garage still, don’t always translate into making the best possible product for a commercial operation. To that end, we hope to provide some basic foundational distilling knowledge for new craft distillers and those who have not been formally trained in a series of articles that cover the key components of distilling at a craft level. While the principles laid out in the READ FOUNDATIONS subsequent articles are not always hard and fast rules, there are often OF CRAFT DISTILLING 1: MASHING good reasons that they have become guiding principles. Rules can be broken, but one should learn the rules in order to know best how to break them. We will attempt to explain the reasons for these principles or best practicREAD FOUNDATIONS es as much as we can, but given the OF CRAFT DISTILLING space constraints of a magazine, this 2: FERMENTATION will not always be possible. This article, Distilling, continues and builds on the contents from the Mashing and Fermentation articles in previous issues of Artisan Spirit.

The Equipment of Distillation Finally, we get to the actual distillation. With some luck and plenty of practice, the distiller has a wash or mash that has fermented to between five and ten percent ABV and contains the desired level of other flavor compounds, whether from raw materials or yeast/bacteria metabolism. It’s time to fire the still. We’ll focus here on batch distillation — filling and running the still for a batch, then dumping it and possibly refilling — primarily using a pot still, and then briefly discuss the use of a column still with plates. W W W . ARTISANSPIRITMAG . C O M

A pot still is composed of a few common sections. The pot itself contains the charge for distillation and the heat source. Just as with fermentation space, the pot will have a gross volume indicating total capacity, and a net volume that may be 20 to 30 percent less to account for foaming, especially during stripping runs. Directly above the pot is the helmet, which connects to the pipe — known as the lyne arm — that runs to the condenser. All three primary pieces of the still can vary in shape. The helmet often follows tra-

ditional Scottish designs: straight to the lyne arm, ball-shaped, or a wide-at-the-bottom and slowly tapering lantern shape. The lyne arm can be short or long, angled up, down, or horizontal. Craft whiskey stills are commonly designed with shorter necks, but exceptions exist. The unusually tall stills at the Glenmorangie distillery in Scotland are a well-marketed aspect of their operation. Because of its durability and ability to be cleaned with strong chemicals, stainless steel often constitutes a large part of the still. How101