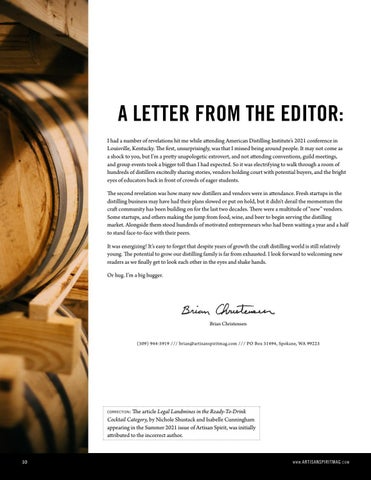 A LETTER FROM THE EDITOR: I had a number of revelations hit me while attending American Distilling Institute’s 2021 conference in Louisville, Kentucky. The first, unsurprisingly, was that I missed being around people. It may not come as a shock to you, but I’m a pretty unapologetic extrovert, and not attending conventions, guild meetings, and group events took a bigger toll than I had expected. So it was electrifying to walk through a room of hundreds of distillers excitedly sharing stories, vendors holding court with potential buyers, and the bright eyes of educators back in front of crowds of eager students. The second revelation was how many new distillers and vendors were in attendance. Fresh startups in the distilling business may have had their plans slowed or put on hold, but it didn&#39;t derail the momentum the craft community has been building on for the last two decades. There were a multitude of “new” vendors. Some startups, and others making the jump from food, wine, and beer to begin serving the distilling market. Alongside them stood hundreds of motivated entrepreneurs who had been waiting a year and a half to stand face-to-face with their peers. It was energizing! It’s easy to forget that despite years of growth the craft distilling world is still relatively young. The potential to grow our distilling family is far from exhausted. I look forward to welcoming new readers as we finally get to look each other in the eyes and shake hands. Or hug. I’m a big hugger.

: The article Legal Landmines in the Ready-To-Drink Cocktail Category, by Nichole Shustack and Isabelle Cunningham appearing in the Summer 2021 issue of Artisan Spirit, was initially attributed to the incorrect author.