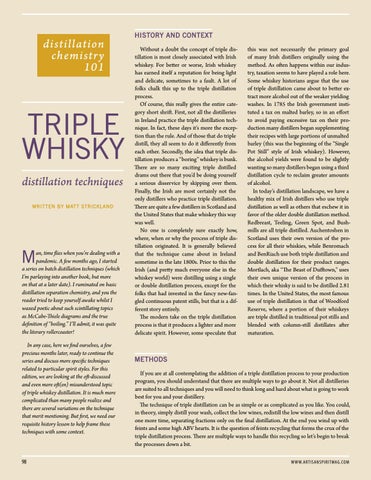 an, time flies when you’re dealing with a pandemic. A few months ago, I started a series on batch distillation techniques (which I’m parlaying into another book, but more on that at a later date). I ruminated on basic distillation separation chemistry, and you the reader tried to keep yourself awake whilst I waxed poetic about such scintillating topics as McCabe-Thiele diagrams and the true definition of “boiling.” I’ll admit, it was quite the literary rollercoaster! In any case, here we find ourselves, a few precious months later, ready to continue the series and discuss more specific techniques related to particular spirit styles. For this edition, we are looking at the oft-discussed and even more oft(en) misunderstood topic of triple whiskey distillation. It is much more complicated than many people realize and there are several variations on the technique that merit mentioning. But first, we need our requisite history lesson to help frame these techniques with some context.

this was not necessarily the primary goal of many Irish distillers originally using the method. As often happens within our industry, taxation seems to have played a role here. Some whiskey historians argue that the use of triple distillation came about to better extract more alcohol out of the weaker yielding washes. In 1785 the Irish government instituted a tax on malted barley, so in an effort to avoid paying excessive tax on their production many distillers began supplementing their recipes with large portions of unmalted barley (this was the beginning of the “Single Pot Still” style of Irish whiskey). However, the alcohol yields were found to be slightly wanting so many distillers began using a third distillation cycle to reclaim greater amounts of alcohol. In today’s distillation landscape, we have a healthy mix of Irish distillers who use triple distillation as well as others that eschew it in favor of the older double distillation method. Redbreast, Teeling, Green Spot, and Bushmills are all triple distilled. Auchentoshen in Scotland uses their own version of the process for all their whiskies, while Benromach and BenRiach use both triple distillation and double distillation for their product ranges. Mortlach, aka “The Beast of Dufftown,” uses their own unique version of the process in which their whisky is said to be distilled 2.81 times. In the United States, the most famous use of triple distillation is that of Woodford Reserve, where a portion of their whiskeys are triple distilled in traditional pot stills and blended with column-still distillates after maturation.

METHODS If you are at all contemplating the addition of a triple distillation process to your production program, you should understand that there are multiple ways to go about it. Not all distilleries are suited to all techniques and you will need to think long and hard about what is going to work best for you and your distillery. The technique of triple distillation can be as simple or as complicated as you like. You could, in theory, simply distill your wash, collect the low wines, redistill the low wines and then distill one more time, separating fractions only on the final distillation. At the end you wind up with feints and some high ABV hearts. It is the question of feints recycling that forms the crux of the triple distillation process. There are multiple ways to handle this recycling so let’s begin to break the processes down a bit. WWW.ART ISANSPI RI TMAG.CO M