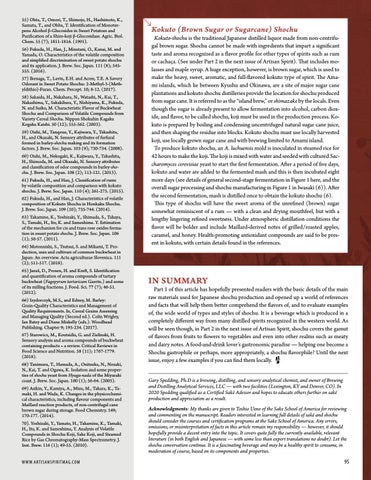 Kokuto-shochu is the traditional Japanese distilled liquor made from non-centrifugal brown sugar. Shochu cannot be made with ingredients that impart a significant taste and aroma recognized as a flavor profile for other types of spirits such as rum or cachaça. (See under Part 2 in the next issue of Artisan Spirit). That includes molasses and maple syrup. A huge exception, however, is brown sugar, which is used to make the heavy, sweet, aromatic, and full-flavored kokuto type of spirit. The Amami islands, which lie between Kyushu and Okinawa, are a site of major sugar cane plantations and kokuto shochu distilleries provide the location for shochu produced from sugar cane. It is referred to as the “island brew,” or shimazake by the locals. Even though the sugar is already present to allow fermentation into alcohol, carbon dioxide, and flavor, to be called shochu, koji must be used in the production process. Kokuto is prepared by boiling and condensing uncentrifuged natural sugar cane juice, and then shaping the residue into blocks. Kokuto shochu must use locally harvested koji, use locally grown sugar cane and with brewing limited to Amami island. To produce kokuto shochu, an A. luchuensis mold is inoculated in steamed rice for 42 hours to make the koji. The koji is mixed with water and seeded with cultured Saccharomyces cerevisiae yeast to start the first fermentation. After a period of five days, kokuto and water are added to the fermented mash and this is then incubated eight more days (see details of general second-stage fermentation in Figure 1 here, and the overall sugar processing and shochu manufacturing in Figure 1 in Iwasaki (6)). After the second fermentation, mash is distilled once to obtain the kokuto shochu (6). This type of shochu will have the sweet aroma of the unrefined (brown) sugar somewhat reminiscent of a rum — with a clean and drying mouthfeel, but with a lengthy lingering refined sweetness. Under atmospheric distillation conditions the flavor will be bolder and include Maillard-derived notes of grilled/roasted apples, caramel, and honey. Health-promoting antioxidant compounds are said to be present in kokuto, with certain details found in the references.

Part 1 of this article has hopefully presented readers with the basic details of the main raw materials used for Japanese shochu production and opened up a world of references and facts that will help them better comprehend the flavors of, and to evaluate examples of, the wide world of types and styles of shochu. It is a beverage which is produced in a completely different way from many distilled spirits recognized in the western world. As will be seen though, in Part 2 in the next issue of Artisan Spirit, shochu covers the gamut of flavors from fruits to flowers to vegetables and even into other realms such as meaty and dairy notes. A food-and-drink lover’s gastronomic paradise — helping one become a Shochu gastrophile or perhaps, more appropriately, a shochu flavorphile? Until the next issue, enjoy a few examples if you can find them locally. Gary Spedding, Ph.D is a brewing, distilling, and sensory analytical chemist, and owner of Brewing and Distilling Analytical Services, LLC — with two facilities (Lexington, KY and Denver, CO). In 2020 Spedding qualified as a Certified Saké Advisor and hopes to educate others further on saké production and appreciation as a result. Acknowledgments: My thanks are given to Toshio Ueno of the Sake School of America for reviewing and commenting on the manuscript. Readers interested in learning full details of saké and shochu should consider the courses and certification programs at the Sake School of America. Any errors, omissions, or misinterpretation of facts in this article remain my responsibility — however, it should hopefully provide a decent entry into the topic. It covers quite fully the currently available, relevant literature (in both English and Japanese — with some less than expert translations no doubt). Let the shochu conversation continue. It is a fascinating beverage and may be a healthy spirit to consume, in moderation of course, based on its components and properties.