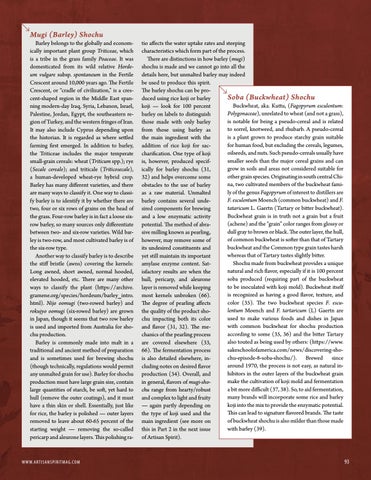 Barley belongs to the globally and economically important plant group Triticeae, which is a tribe in the grass family Poaceae. It was domesticated from its wild relative Hordeum vulgare subsp. spontaneum in the Fertile Crescent around 10,000 years ago. The Fertile Crescent, or “cradle of civilization,” is a crescent-shaped region in the Middle East spanning modern-day Iraq, Syria, Lebanon, Israel, Palestine, Jordan, Egypt, the southeastern region of Turkey, and the western fringes of Iran. It may also include Cyprus depending upon the historian. It is regarded as where settled farming first emerged. In addition to barley, the Triticeae includes the major temperate small-grain cereals: wheat (Triticum spp.); rye (Secale cereale); and triticale (Triticosecale), a human-developed wheat-rye hybrid crop. Barley has many different varieties, and there are many ways to classify it. One way to classify barley is to identify it by whether there are two, four or six rows of grains on the head of the grass. Four-row barley is in fact a loose sixrow barley, so many sources only differentiate between two- and six-row varieties. Wild barley is two-row, and most cultivated barley is of the six-row type. Another way to classify barley is to describe the stiff bristle (awns) covering the kernels: Long awned, short awned, normal hooded, elevated hooded, etc. There are many other ways to classify the plant (https://archive. gramene.org/species/hordeum/barley_intro. html). Nijo oomugi (two-rowed barley) and rokujyo oomugi (six-rowed barley) are grown in Japan, though it seems that two row barley is used and imported from Australia for shochu production. Barley is commonly made into malt in a traditional and ancient method of preparation and is sometimes used for brewing shochu (though technically, regulations would permit any unmalted grain for use). Barley for shochu production must have large grain size, contain large quantities of starch, be soft, yet hard to hull (remove the outer coatings), and it must have a thin skin or shell. Essentially, just like for rice, the barley is polished — outer layers removed to leave about 60-65 percent of the starting weight — removing the so-called pericarp and aleurone layers. This polishing ra-

tio affects the water uptake rates and steeping characteristics which form part of the process. There are distinctions in how barley (mugi) shochu is made and we cannot go into all the details here, but unmalted barley may indeed be used to produce this spirit. The barley shochu can be proSoba (Buckwheat) Shochu duced using rice koji or barley Buckwheat, aka. Kuttu, (Fagopyrum esculentum: koji — look for 100 percent Polygonaceae), unrelated to wheat (and not a grass), barley on labels to distinguish is notable for being a pseudo-cereal and is related those made with only barley to sorrel, knotweed, and rhubarb. A pseudo-cereal from those using barley as is a plant grown to produce starchy grain suitable the main ingredient with the for human food, but excluding the cereals, legumes, addition of rice koji for sacoilseeds, and nuts. Such pseudo-cereals usually have charification. One type of koji smaller seeds than the major cereal grains and can is, however, produced specifgrow in soils and areas not considered suitable for ically for barley shochu (31, other grain species. Originating in south central Chi32) and helps overcome some na, two cultivated members of the buckwheat famiobstacles to the use of barley ly of the genus Fagopyrum of interest to distillers are as a raw material. Unmalted F. esculentum Moench (common buckwheat) and F. barley contains several undetataricum L. Gaertn (Tartary or bitter buckwheat). sired components for brewing Buckwheat grain is in truth not a grain but a fruit and a low enzymatic activity (achene) and the “grain” color ranges from glossy or potential. The method of abradull gray to brown or black. The outer layer, the hull, sive milling known as pearling, of common buckwheat is softer than that of Tartary however, may remove some of buckwheat and the Common type grain tastes harsh its undesired constituents and whereas that of Tartary tastes slightly bitter. yet still maintain its important Shochu made from buckwheat provides a unique amylase enzyme content. Satnatural and rich flavor, especially if it is 100 percent isfactory results are when the soba produced (requiring part of the buckwheat hull, pericarp, and aleurone to be inoculated with koji mold). Buckwheat itself layer is removed while keeping is recognized as having a good flavor, texture, and most kernels unbroken (66). color (35). The two buckwheat species F. escuThe degree of pearling affects lentum Moench and F. tartaricum (L) Gaertn are the quality of the product shoused to make various foods and dishes in Japan chu impacting both its color with common buckwheat for shochu production and flavor (31, 32). The meaccording to some (35, 36) and the bitter Tartary chanics of the pearling process also touted as being used by others: (https://www. are covered elsewhere (33, sakeschoolofamerica.com/news/discovering-sho66). The fermentation process chu-episode-8-soba-shochu/). Brewed since is also detailed elsewhere, inaround 1970, the process is not easy, as natural including notes on desired flavor hibitors in the outer layers of the buckwheat grain production (34). Overall, and make the cultivation of koji mold and fermentation in general, flavors of mugi-shoa bit more difficult (37, 38). So, to aid fermentation, chu range from hearty/robust many brands will incorporate some rice and barley and complex to light and fruity koji into the mix to provide the enzymatic potential. — again partly depending on This can lead to signature flavored brands. The taste the type of koji used and the of buckwheat shochu is also milder than those made main ingredient (see more on with barley (39). this in Part 2 in the next issue of Artisan Spirit).