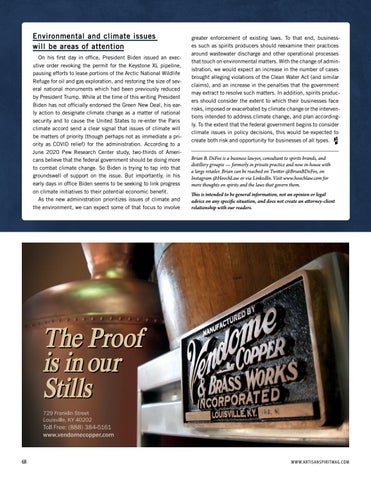 Environmental and climate issues will be areas of attention On his first day in office, President Biden issued an executive order revoking the permit for the Keystone XL pipeline, pausing efforts to lease portions of the Arctic National Wildlife Refuge for oil and gas exploration, and restoring the size of several national monuments which had been previously reduced by President Trump. While at the time of this writing President Biden has not officially endorsed the Green New Deal, his early action to designate climate change as a matter of national security and to cause the United States to re-enter the Paris climate accord send a clear signal that issues of climate will be matters of priority (though perhaps not as immediate a priority as COVID relief) for the administration. According to a June 2020 Pew Research Center study, two-thirds of Americans believe that the federal government should be doing more to combat climate change. So Biden is trying to tap into that groundswell of support on the issue. But importantly, in his early days in office Biden seems to be seeking to link progress on climate initiatives to their potential economic benefit. As the new administration prioritizes issues of climate and the environment, we can expect some of that focus to involve

greater enforcement of existing laws. To that end, businesses such as spirits producers should reexamine their practices around wastewater discharge and other operational processes that touch on environmental matters. With the change of administration, we would expect an increase in the number of cases brought alleging violations of the Clean Water Act (and similar claims), and an increase in the penalties that the government may extract to resolve such matters. In addition, spirits producers should consider the extent to which their businesses face risks, imposed or exacerbated by climate change or the interventions intended to address climate change, and plan accordingly. To the extent that the federal government begins to consider climate issues in policy decisions, this would be expected to create both risk and opportunity for businesses of all types. Brian B. DeFoe is a business lawyer, consultant to spirits brands, and distillery groupie — formerly in private practice and now in-house with a large retailer. Brian can be reached on Twitter @BrianBDeFoe, on Instagram @HoochLaw or via LinkedIn. Visit www.hoochlaw.com for more thoughts on spirits and the laws that govern them.  This is intended to be general information, not an opinion or legal advice on any specific situation, and does not create an attorney-client relationship with our readers.