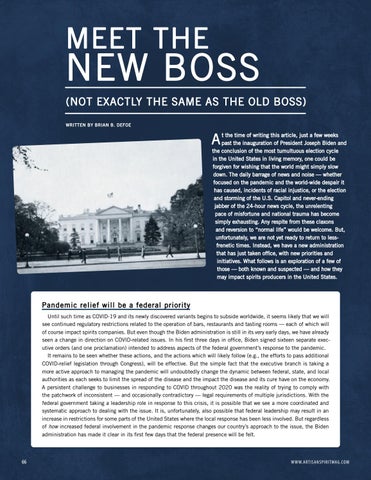 NEW BOSS (NOT (N OT EXACTLY THE SAME AS THE OLD BOSS) WRITTEN BY BRIAN B. DEFOE

t the time of writing this article, just a few weeks past the inauguration of President Joseph Biden and the conclusion of the most tumultuous election cycle in the United States in living memory, one could be forgiven for wishing that the world might simply slow down. The daily barrage of news and noise — whether focused on the pandemic and the world-wide despair it has caused, incidents of racial injustice, or the election and storming of the U.S. Capitol and never-ending jabber of the 24-hour news cycle, the unrelenting pace of misfortune and national trauma has become simply exhausting. Any respite from these claxons and reversion to “normal life” would be welcome. But, unfortunately, we are not yet ready to return to lessfrenetic times. Instead, we have a new administration that has just taken office, with new priorities and initiatives. What follows is an exploration of a few of those — both known and suspected — and how they may impact spirits producers in the United States.

Pandemic relief will be a federal priority Until such time as COVID-19 and its newly discovered variants begins to subside worldwide, it seems likely that we will see continued regulatory restrictions related to the operation of bars, restaurants and tasting rooms — each of which will of course impact spirits companies. But even though the Biden administration is still in its very early days, we have already seen a change in direction on COVID-related issues. In his first three days in office, Biden signed sixteen separate executive orders (and one proclamation) intended to address aspects of the federal government’s response to the pandemic. It remains to be seen whether these actions, and the actions which will likely follow (e.g., the efforts to pass additional COVID-relief legislation through Congress), will be effective. But the simple fact that the executive branch is taking a more active approach to managing the pandemic will undoubtedly change the dynamic between federal, state, and local authorities as each seeks to limit the spread of the disease and the impact the disease and its cure have on the economy. A persistent challenge to businesses in responding to COVID throughout 2020 was the reality of trying to comply with the patchwork of inconsistent — and occasionally contradictory — legal requirements of multiple jurisdictions. With the federal government taking a leadership role in response to this crisis, it is possible that we see a more coordinated and systematic approach to dealing with the issue. It is, unfortunately, also possible that federal leadership may result in an increase in restrictions for some parts of the United States where the local response has been less involved. But regardless of how increased federal involvement in the pandemic response changes our country’s approach to the issue, the Biden administration has made it clear in its first few days that the federal presence will be felt.