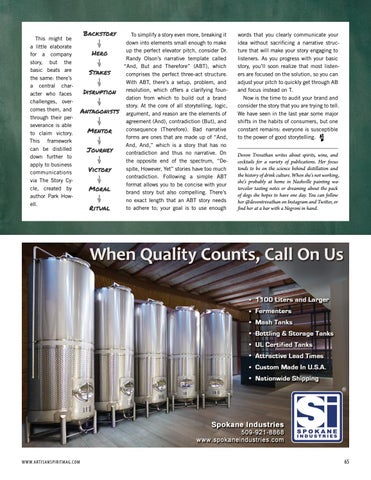 This might be a little elaborate for a company story, but the basic beats are the same: there’s a central character who faces challenges, overcomes them, and through their perseverance is able to claim victory. This framework can be distilled down further to apply to business communications via The Story Cycle, created by author Park Howell.

To simplify a story even more, breaking it down into elements small enough to make up the perfect elevator pitch, consider Dr. Randy Olson’s narrative template called “And, But and Therefore” (ABT), which comprises the perfect three-act structure. With ABT, there’s a setup, problem, and resolution, which offers a clarifying foundation from which to build out a brand story. At the core of all storytelling, logic, argument, and reason are the elements of agreement (And), contradiction (But), and consequence (Therefore). Bad narrative forms are ones that are made up of “And, And, And,” which is a story that has no contradiction and thus no narrative. On the opposite end of the spectrum, “Despite, However, Yet” stories have too much contradiction. Following a simple ABT format allows you to be concise with your brand story but also compelling. There’s no exact length that an ABT story needs to adhere to; your goal is to use enough

words that you clearly communicate your idea without sacrificing a narrative structure that will make your story engaging to listeners. As you progress with your basic story, you’ll soon realize that most listeners are focused on the solution, so you can adjust your pitch to quickly get through AB and focus instead on T. Now is the time to audit your brand and consider the story that you are trying to tell. We have seen in the last year some major shifts in the habits of consumers, but one constant remains: everyone is susceptible to the power of good storytelling. Devon Trevathan writes about spirits, wine, and cocktails for a variety of publications. Her focus tends to be on the science behind distillation and the history of drink culture. When she’s not working, she’s probably at home in Nashville painting watercolor tasting notes or dreaming about the pack of dogs she hopes to have one day. You can follow her @devontrevathan on Instagram and Twitter, or find her at a bar with a Negroni in hand.