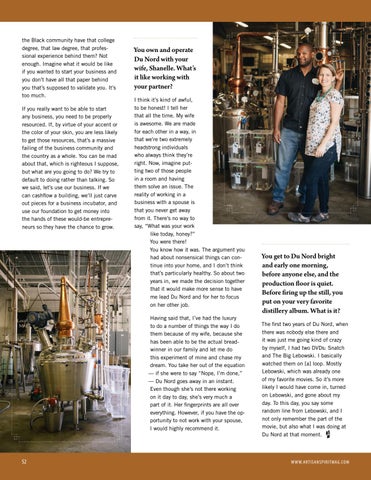 the Black community have that college degree, that law degree, that professional experience behind them? Not enough. Imagine what it would be like if you wanted to start your business and you don’t have all that paper behind you that’s supposed to validate you. It’s too much. If you really want to be able to start any business, you need to be properly resourced. If, by virtue of your accent or the color of your skin, you are less likely to get those resources, that’s a massive failing of the business community and the country as a whole. You can be mad about that, which is righteous I suppose, but what are you going to do? We try to default to doing rather than talking. So we said, let’s use our business. If we can cashflow a building, we’ll just carve out pieces for a business incubator, and use our foundation to get money into the hands of these would-be entrepreneurs so they have the chance to grow.

You own and operate Du Nord with your wife, Shanelle. What’s it like working with your partner? I think it’s kind of awful, to be honest! I tell her that all the time. My wife is awesome. We are made for each other in a way, in that we’re two extremely headstrong individuals who always think they’re right. Now, imagine putting two of those people in a room and having them solve an issue. The reality of working in a business with a spouse is that you never get away from it. There’s no way to say, “What was your work like today, honey?” You were there! You know how it was. The argument you had about nonsensical things can continue into your home, and I don’t think that’s particularly healthy. So about two years in, we made the decision together that it would make more sense to have me lead Du Nord and for her to focus on her other job. Having said that, I’ve had the luxury to do a number of things the way I do them because of my wife, because she has been able to be the actual breadwinner in our family and let me do this experiment of mine and chase my dream. You take her out of the equation — if she were to say “Nope, I’m done,” — Du Nord goes away in an instant. Even though she’s not there working on it day to day, she’s very much a part of it. Her fingerprints are all over everything. However, if you have the opportunity to not work with your spouse, I would highly recommend it.

You get to Du Nord bright and early one morning, before anyone else, and the production floor is quiet. Before firing up the still, you put on your very favorite distillery album. What is it? The first two years of Du Nord, when there was nobody else there and it was just me going kind of crazy by myself, I had two DVDs: Snatch and The Big Lebowski. I basically watched them on [a] loop. Mostly Lebowski, which was already one of my favorite movies. So it’s more likely I would have come in, turned on Lebowski, and gone about my day. To this day, you say some random line from Lebowski, and I not only remember the part of the movie, but also what I was doing at Du Nord at that moment.