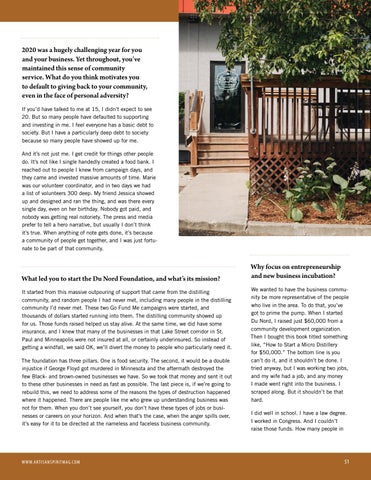 2020 was a hugely challenging year for you and your business. Yet throughout, you’ve maintained this sense of community service. What do you think motivates you to default to giving back to your community, even in the face of personal adversity? If you’d have talked to me at 15, I didn’t expect to see 20. But so many people have defaulted to supporting and investing in me. I feel everyone has a basic debt to society. But I have a particularly deep debt to society because so many people have showed up for me. And it’s not just me. I get credit for things other people do. It’s not like I single handedly created a food bank. I reached out to people I knew from campaign days, and they came and invested massive amounts of time. Marie was our volunteer coordinator, and in two days we had a list of volunteers 300 deep. My friend Jessica showed up and designed and ran the thing, and was there every single day, even on her birthday. Nobody got paid, and nobody was getting real notoriety. The press and media prefer to tell a hero narrative, but usually I don’t think it’s true. When anything of note gets done, it’s because a community of people get together, and I was just fortunate to be part of that community.

What led you to start the Du Nord Foundation, and what’s its mission? It started from this massive outpouring of support that came from the distilling community, and random people I had never met, including many people in the distilling community I’d never met. These two Go Fund Me campaigns were started, and thousands of dollars started running into them. The distilling community showed up for us. Those funds raised helped us stay alive. At the same time, we did have some insurance, and I knew that many of the businesses in that Lake Street corridor in St. Paul and Minneapolis were not insured at all, or certainly underinsured. So instead of getting a windfall, we said OK, we’ll divert the money to people who particularly need it. The foundation has three pillars. One is food security. The second, it would be a double injustice if George Floyd got murdered in Minnesota and the aftermath destroyed the few Black- and brown-owned businesses we have. So we took that money and sent it out to these other businesses in need as fast as possible. The last piece is, if we’re going to rebuild this, we need to address some of the reasons the types of destruction happened where it happened. There are people like me who grew up understanding business was not for them. When you don’t see yourself, you don’t have these types of jobs or businesses or careers on your horizon. And when that’s the case, when the anger spills over, it’s easy for it to be directed at the nameless and faceless business community.

Why focus on entrepreneurship and new business incubation? We wanted to have the business community be more representative of the people who live in the area. To do that, you’ve got to prime the pump. When I started Du Nord, I raised just $60,000 from a community development organization. Then I bought this book titled something like, “How to Start a Micro Distillery for $50,000.” The bottom line is you can’t do it, and it shouldn’t be done. I tried anyway, but I was working two jobs, and my wife had a job, and any money I made went right into the business. I scraped along. But it shouldn’t be that hard. I did well in school. I have a law degree. I worked in Congress. And I couldn’t raise those funds. How many people in