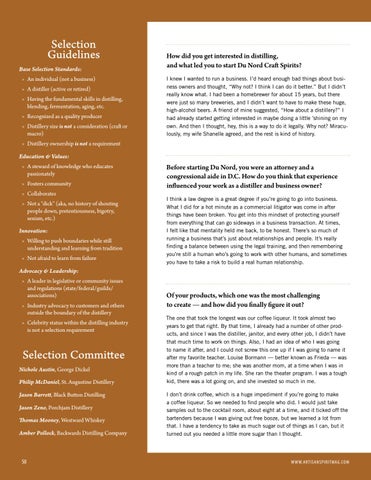 Selection Guidelines Base Selection Standards: › An individual (not a business) › A distiller (active or retired) › Having the fundamental skills in distilling, blending, fermentation, aging, etc. › Recognized as a quality producer › Distillery size is not a consideration (craft or macro)

How did you get interested in distilling, and what led you to start Du Nord Craft Spirits? I knew I wanted to run a business. I’d heard enough bad things about business owners and thought, “Why not? I think I can do it better.” But I didn’t really know what. I had been a homebrewer for about 15 years, but there were just so many breweries, and I didn’t want to have to make these huge, high-alcohol beers. A friend of mine suggested, “How about a distillery?” I had already started getting interested in maybe doing a little ’shining on my own. And then I thought, hey, this is a way to do it legally. Why not? Miraculously, my wife Shanelle agreed, and the rest is kind of history.

› Distillery ownership is not a requirement Education & Values: › A steward of knowledge who educates passionately › Fosters community › Collaborates › Not a “dick” (aka, no history of shouting people down, pretentiousness, bigotry, sexism, etc.) Innovation: › Willing to push boundaries while still understanding and learning from tradition › Not afraid to learn from failure

Before starting Du Nord, you were an attorney and a congressional aide in D.C. How do you think that experience influenced your work as a distiller and business owner? I think a law degree is a great degree if you’re going to go into business. What I did for a hot minute as a commercial litigator was come in after things have been broken. You get into this mindset of protecting yourself from everything that can go sideways in a business transaction. At times, I felt like that mentality held me back, to be honest. There’s so much of running a business that’s just about relationships and people. It’s really finding a balance between using the legal training, and then remembering you’re still a human who’s going to work with other humans, and sometimes you have to take a risk to build a real human relationship.

Advocacy & Leadership: › A leader in legislative or community issues and regulations (state/federal/guilds/ associations) › Industry advocacy to customers and others outside the boundary of the distillery › Celebrity status within the distilling industry is not a selection requirement

Of your products, which one was the most challenging to create — and how did you finally figure it out? The one that took the longest was our coffee liqueur. It took almost two years to get that right. By that time, I already had a number of other products, and since I was the distiller, janitor, and every other job, I didn’t have that much time to work on things. Also, I had an idea of who I was going to name it after, and I could not screw this one up if I was going to name it after my favorite teacher. Louise Bormann — better known as Frieda — was more than a teacher to me; she was another mom, at a time when I was in kind of a rough patch in my life. She ran the theater program. I was a tough kid, there was a lot going on, and she invested so much in me. I don’t drink coffee, which is a huge impediment if you’re going to make a coffee liqueur. So we needed to find people who did. I would just take samples out to the cocktail room, about eight at a time, and it ticked off the bartenders because I was giving out free booze, but we learned a lot from that. I have a tendency to take as much sugar out of things as I can, but it turned out you needed a little more sugar than I thought.