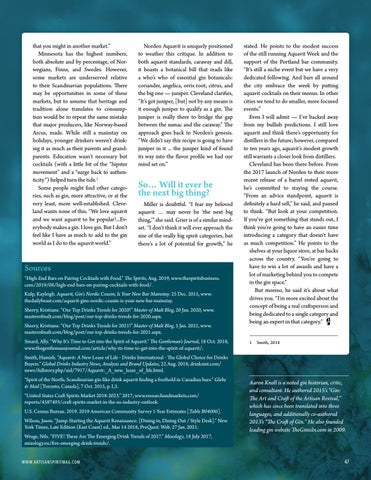 that you might in another market.” Minnesota has the highest numbers, both absolute and by percentage, of Norwegians, Finns, and Swedes. However, some markets are underserved relative to their Scandinavian populations. There may be opportunities in some of these markets, but to assume that heritage and tradition alone translates to consumption would be to repeat the same mistake that major producers, like Norway-based Arcus, made. While still a mainstay on holidays, younger drinkers weren’t drinking it as much as their parents and grandparents. Education wasn’t necessary but cocktails (with a little bit of the “hipster movement” and a “surge back to authenticity”) helped turn the tide.1 Some people might find other categories, such as gin, more attractive, or at the very least, more well-established. Cleveland wants none of this. “We love aquavit and we want aquavit to be popular!...Everybody makes a gin. I love gin. But I don’t feel like I have as much to add to the gin world as I do to the aquavit world.”

Norden Aquavit is uniquely positioned to weather this critique. In addition to both aquavit standards, caraway and dill, it boasts a botanical bill that reads like a who’s who of essential gin botanicals: coriander, angelica, orris root, citrus, and the big one — juniper. Cleveland clarifies, “It’s got juniper, [but] not by any means is it enough juniper to qualify as a gin. The juniper is really there to bridge the gap between the sumac and the caraway.” The approach goes back to Norden’s genesis. “We didn’t say this recipe is going to have juniper in it ... the juniper kind of found its way into the flavor profile we had our mind set on.”

So… Will it ever be the next big thing? Miller is doubtful. “I fear my beloved aquavit … may never be ‘the next big thing,’” she said. Grier is of a similar mindset. “I don't think it will ever approach the size of the really big spirit categories, but there's a lot of potential for growth,” he

stated. He points to the modest success of the still running Aquavit Week and the support of the Portland bar community. “It's still a niche event but we have a very dedicated following. And bars all around the city embrace the week by putting aquavit cocktails on their menus. In other cities we tend to do smaller, more focused events.” Even I will admit — I’ve backed away from my bullish predictions. I still love aquavit and think there’s opportunity for distillers in the future; however, compared to ten years ago, aquavit’s modest growth still warrants a closer look from distillers. Cleveland has been there before. From the 2017 launch of Norden to their more recent release of a barrel rested aquavit, he’s committed to staying the course. “From an advice standpoint, aquavit is definitely a hard sell,” he said, and paused to think. “But look at your competition. If you’ve got something that stands out, I think you’re going to have an easier time introducing a category that doesn't have as much competition.” He points to the shelves at your liquor store, at bar backs across the country. “You’re going to have to win a lot of awards and have a lot of marketing behind you to compete in the gin space.“ But moreso, he said it’s about what drives you. “I'm more excited about the concept of being a real craftsperson and being dedicated to a single category and being an expert in that category.” 1  Smith, 2018

Aaron Knoll is a noted gin historian, critic, and consultant. He authored 2015's “Gin: The Art and Craft of the Artisan Revival,” which has since been translated into three languages, and additionally co-authored 2013's “The Craft of Gin.” He also founded leading gin website TheGinisIn.com in 2009.