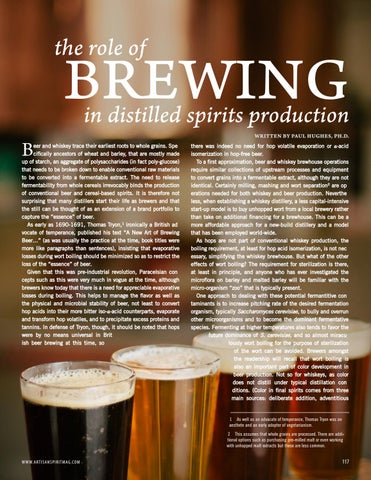 eer and whiskey trace their earliest roots to whole grains. Spe cifically ancestors of wheat and barley, that are mostly made up of starch, an aggregate of polysaccharides (in fact poly-glucose) that needs to be broken down to enable conventional raw materials to be converted into a fermentable extract. The need to release fermentability from whole cereals irrevocably binds the production of conventional beer and cereal-based spirits. It is therefore not surprising that many distillers start their life as brewers and that the still can be thought of as an extension of a brand portfolio to capture the “essence” of beer. As early as 1690-1691, Thomas Tryon,1 ironically a British ad vocate of temperance, published his text “A New Art of Brewing Beer…” (as was usually the practice at the time, book titles were more like paragraphs than sentences), insisting that evaporative losses during wort boiling should be minimized so as to restrict the loss of the “essence” of beer. Given that this was pre-industrial revolution, Paracelsian con cepts such as this were very much in vogue at the time, although brewers know today that there is a need for appreciable evaporative losses during boiling. This helps to manage the flavor as well as the physical and microbial stability of beer, not least to convert hop acids into their more bitter iso-α-acid counterparts, evaporate and transform hop volatiles, and to precipitate excess proteins and tannins. In defense of Tryon, though, it should be noted that hops were by no means universal in Brit ish beer brewing at this time, so

WRITTEN BY PAUL HUGHES, PH.D. there was indeed no need for hop volatile evaporation or α-acid isomerization in hop-free beer. To a first approximation, beer and whiskey brewhouse operations require similar collections of upstream processes and equipment to convert grains into a fermentable extract, although they are not identical. Certainly milling, mashing and wort separation2 are op erations needed for both whiskey and beer production. Neverthe less, when establishing a whiskey distillery, a less capital-intensive start-up model is to buy unhopped wort from a local brewery rather than take on additional financing for a brewhouse. This can be a more affordable approach for a new-build distillery and a model that has been employed world-wide. As hops are not part of conventional whiskey production, the boiling requirement, at least for hop acid isomerization, is not nec essary, simplifying the whiskey brewhouse. But what of the other effects of wort boiling? The requirement for sterilization is there, at least in principle, and anyone who has ever investigated the microflora on barley and malted barley will be familiar with the micro-organism “zoo” that is typically present. One approach to dealing with these potential fermantitive con taminants is to increase pitching rate of the desired fermentation organism, typically Saccharomyces cerevisiae, to bully and overrun other microorganisms and to become the dominant fermentative species. Fermenting at higher temperatures also tends to favor the future dominance of S. cerevisiae, and so almost miracu lously wort boiling for the purpose of sterilization of the wort can be avoided. Brewers amongst the readership will recall that wort boiling is also an important part of color development in beer production. Not so for whiskeys, as color does not distill under typical distillation con ditions. (Color in final spirits comes from three main sources: deliberate addition, adventitious

1  As well as an advocate of temperance, Thomas Tryon was an aesthete and an early adopter of vegetarianism. 2  This assumes that whole grains are processed. There are additional options such as purchasing pre-milled malt or even working with unhopped malt extracts but these are less common. WWW.ART ISANSP IRITMAG.COM