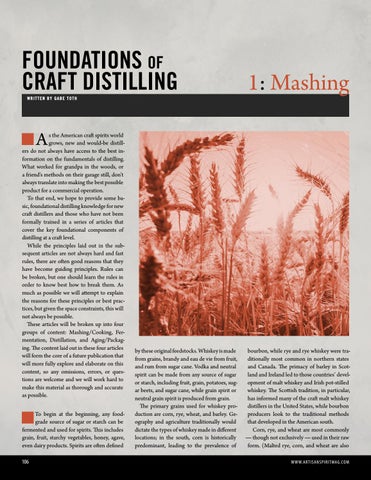 s the American craft spirits world grows, new and would-be distillers do not always have access to the best information on the fundamentals of distilling. What worked for grandpa in the woods, or a friend’s methods on their garage still, don’t always translate into making the best possible product for a commercial operation. To that end, we hope to provide some basic, foundational distilling knowledge for new craft distillers and those who have not been formally trained in a series of articles that cover the key foundational components of distilling at a craft level. While the principles laid out in the subsequent articles are not always hard and fast rules, there are often good reasons that they have become guiding principles. Rules can be broken, but one should learn the rules in order to know best how to break them. As much as possible we will attempt to explain the reasons for these principles or best practices, but given the space constraints, this will not always be possible. These articles will be broken up into four groups of content: Mashing/Cooking, Fermentation, Distillation, and Aging/Packaging. The content laid out in these four articles will form the core of a future publication that will more fully explore and elaborate on this content, so any omissions, errors, or questions are welcome and we will work hard to make this material as thorough and accurate as possible. To begin at the beginning, any foodgrade source of sugar or starch can be fermented and used for spirits. This includes grain, fruit, starchy vegetables, honey, agave, even dairy products. Spirits are often defined 106

by these original feedstocks. Whiskey is made from grains, brandy and eau de vie from fruit, and rum from sugar cane. Vodka and neutral spirit can be made from any source of sugar or starch, including fruit, grain, potatoes, sugar beets, and sugar cane, while grain spirit or neutral grain spirit is produced from grain. The primary grains used for whiskey production are corn, rye, wheat, and barley. Geography and agriculture traditionally would dictate the types of whiskey made in different locations; in the south, corn is historically predominant, leading to the prevalence of

bourbon, while rye and rye whiskey were traditionally most common in northern states and Canada. The primacy of barley in Scotland and Ireland led to those countries’ development of malt whiskey and Irish pot-stilled whiskey. The Scottish tradition, in particular, has informed many of the craft malt whiskey distillers in the United States, while bourbon producers look to the traditional methods that developed in the American south. Corn, rye, and wheat are most commonly — though not exclusively — used in their raw form. (Malted rye, corn, and wheat are also WWW.ART ISANSPI RI TMAG.CO M