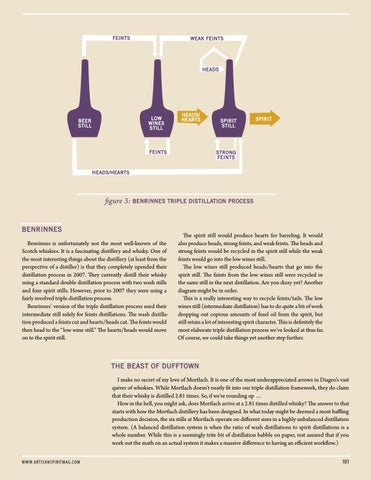 THE BEAST OF DUFFTOWN I make no secret of my love of Mortlach. It is one of the most underappreciated arrows in Diageo’s vast quiver of whiskies. While Mortlach doesn’t neatly fit into our triple distillation framework, they do claim that their whisky is distilled 2.81 times. So, if we’re rounding up … How in the hell, you might ask, does Mortlach arrive at a 2.81 times distilled whisky? The answer to that starts with how the Mortlach distillery has been designed. In what today might be deemed a most baffling production decision, the six stills at Mortlach operate on different sizes in a highly unbalanced distillation system. (A balanced distillation system is when the ratio of wash distillations to spirit distillations is a whole number. While this is a seemingly trite bit of distillation babble on paper, rest assured that if you work out the math on an actual system it makes a massive difference to having an efficient workflow.) WWW.ART ISANSP IRITMAG.COM