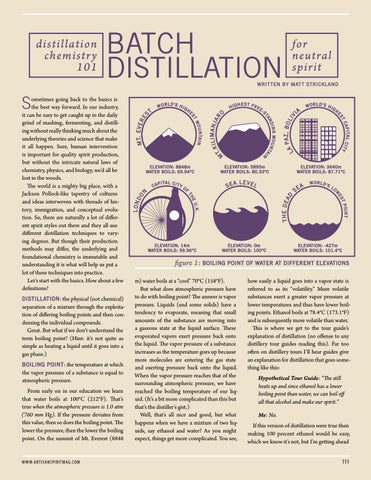 A SE THE DEA D

the vapor pressure of a substance is equal to atmospheric pressure.

BOILING POINT : the temperature at which

separation of a mixture through the exploitation of differing boiling points and then condensing the individual compounds. Great. But what if we don’t understand the term boiling point? (Hint: it’s not quite as simple as heating a liquid until it goes into a gas phase.)

DISTILLATION : the physical (not chemical)

ometimes going back to the basics is the best way forward. In our industry, it can be easy to get caught up in the daily grind of mashing, fermenting, and distilling without really thinking much about the underlying theories and science that make it all happen. Sure, human intervention is important for quality spirit production, but without the intricate natural laws of chemistry, physics, and biology, we’d all be lost in the woods. The world is a mighty big place, with a Jackson Pollock-like tapestry of cultures and ideas interwoven with threads of history, immigration, and conceptual evolution. So, there are naturally a lot of different spirit styles out there and they all use different distillation techniques to varying degrees. But though their production methods may differ, the underlying and foundational chemistry is immutable and understanding it is what will help us put a lot of these techniques into practice. Let’s start with the basics. How about a few definitions?

figure 1: BOILING POINT OF WATER AT DIFFERENT ELEVATIONS m) water boils at a “cool” 70°C (158°F). But what does atmospheric pressure have to do with boiling point? The answer is vapor pressure. Liquids (and some solids) have a tendency to evaporate, meaning that small amounts of the substance are moving into a gaseous state at the liquid surface. These evaporated vapors exert pressure back onto the liquid. The vapor pressure of a substance increases as the temperature goes up because more molecules are entering the gas state and exerting pressure back onto the liquid. When the vapor pressure reaches that of the surrounding atmospheric pressure, we have reached the boiling temperature of our liquid. (It’s a bit more complicated than this but that’s the distiller’s gist.) Well, that’s all nice and good, but what happens when we have a mixture of two liquids, say ethanol and water? As you might expect, things get more complicated. You see,

how easily a liquid goes into a vapor state is referred to as its “volatility.” More volatile substances exert a greater vapor pressure at lower temperatures and thus have lower boiling points. Ethanol boils at 78.4°C (173.1°F) and is subsequently more volatile than water. This is where we get to the tour guide’s explanation of distillation (no offense to any distillery tour guides reading this). Far too often on distillery tours I’ll hear guides give an explanation for distillation that goes something like this: Hypothetical Tour Guide: “The still heats up and since ethanol has a lower boiling point than water, we can boil off all that alcohol and make our spirit.” Me: No. If this version of distillation were true then making 100 percent ethanol would be easy, which we know it’s not, but I’m getting ahead 111