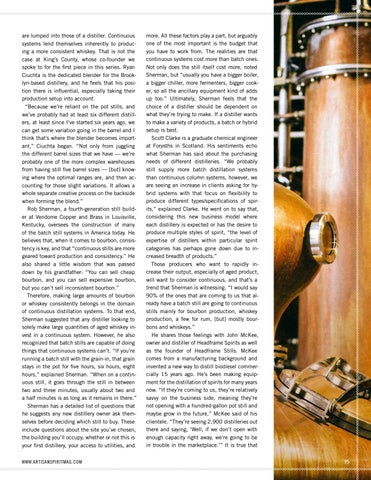 are lumped into those of a distiller. Continuous systems lend themselves inherently to producing a more consistent whiskey. That is not the case at King’s County, whose co-founder we spoke to for the first piece in this series. Ryan Ciuchta is the dedicated blender for the Brooklyn-based distillery, and he feels that his position there is influential, especially taking their production setup into account. “Because we’re reliant on the pot stills, and we’ve probably had at least six different distillers, at least since I’ve started six years ago, we can get some variation going in the barrel and I think that’s where the blender becomes important,” Ciuchta began. “Not only from juggling the different barrel sizes that we have — we’re probably one of the more complex warehouses from having still five barrel sizes — [but] knowing where the optimal ranges are, and then accounting for those slight variations. It allows a whole separate creative process on the backside when forming the blend.” Rob Sherman, a fourth-generation still builder at Vendome Copper and Brass in Louisville, Kentucky, oversees the construction of many of the batch still systems in America today. He believes that, when it comes to bourbon, consistency is key, and that “continuous stills are more geared toward production and consistency.” He also shared a little wisdom that was passed down by his grandfather: “You can sell cheap bourbon, and you can sell expensive bourbon, but you can’t sell inconsistent bourbon.” Therefore, making large amounts of bourbon or whiskey consistently belongs in the domain of continuous distillation systems. To that end, Sherman suggested that any distiller looking to solely make large quantities of aged whiskey invest in a continuous system. However, he also recognized that batch stills are capable of doing things that continuous systems can’t. “If you’re running a batch still with the grain-in, that grain stays in the pot for five hours, six hours, eight hours,” explained Sherman. “When on a continuous still, it goes through the still in between two and three minutes, usually about two and a half minutes is as long as it remains in there.” Sherman has a detailed list of questions that he suggests any new distillery owner ask themselves before deciding which still to buy. These include questions about the site you’ve chosen, the building you’ll occupy, whether or not this is your first distillery, your access to utilities, and WWW.ARTISANSPIRITMAG.COM

more. All these factors play a part, but arguably one of the most important is the budget that you have to work from. The realities are that continuous systems cost more than batch ones. Not only does the still itself cost more, noted Sherman, but “usually you have a bigger boiler, a bigger chiller, more fermenters, bigger cooker, so all the ancillary equipment kind of adds up too.” Ultimately, Sherman feels that the choice of a distiller should be dependent on what they’re trying to make. If a distiller wants to make a variety of products, a batch or hybrid setup is best. Scott Clarke is a graduate chemical engineer at Forysths in Scotland. His sentiments echo what Sherman has said about the purchasing needs of different distilleries. “We probably still supply more batch distillation systems than continuous column systems, however, we are seeing an increase in clients asking for hybrid systems with that focus on flexibility to produce different types/specifications of spirits,” explained Clarke. He went on to say that, considering this new business model where each distillery is expected or has the desire to produce multiple styles of spirit, “the level of expertise of distillers within particular spirit categories has perhaps gone down due to increased breadth of products.” Those producers who want to rapidly increase their output, especially of aged product, will want to consider continuous, and that’s a trend that Sherman is witnessing. “I would say 90% of the ones that are coming to us that already have a batch still are going to continuous stills mainly for bourbon production, whiskey production, a few for rum, [but] mostly bourbons and whiskeys.” He shares those feelings with John McKee, owner and distiller of Headframe Spirits as well as the founder of Headframe Stills. McKee comes from a manufacturing background and invented a new way to distill biodiesel commercially 15 years ago. He’s been making equipment for the distillation of spirits for many years now. “If they’re coming to us, they’re relatively savvy on the business side, meaning they’re not opening with a hundred-gallon pot still and maybe grow in the future,” McKee said of his clientele. “They’re seeing 2,900 distilleries out there and saying, ‘Well, if we don’t open with enough capacity right away, we’re going to be in trouble in the marketplace.’” It is true that