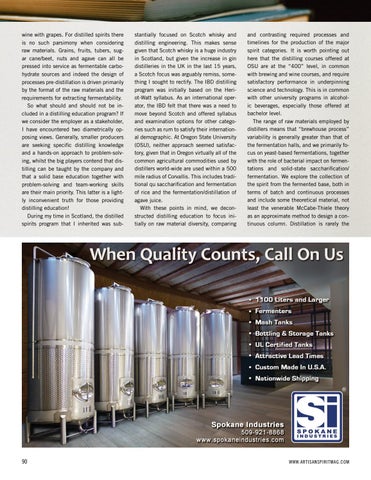 wine with grapes. For distilled spirits there is no such parsimony when considering raw materials. Grains, fruits, tubers, sugar cane/beet, nuts and agave can all be pressed into service as fermentable carbohydrate sources and indeed the design of processes pre-distillation is driven primarily by the format of the raw materials and the requirements for extracting fermentability. So what should and should not be included in a distilling education program? If we consider the employer as a stakeholder, I have encountered two diametrically opposing views. Generally, smaller producers are seeking specific distilling knowledge and a hands-on approach to problem-solving, whilst the big players contend that distilling can be taught by the company and that a solid base education together with problem-solving and team-working skills are their main priority. This latter is a lightly inconvenient truth for those providing distilling education! During my time in Scotland, the distilled spirits program that I inherited was sub-

stantially focused on Scotch whisky and distilling engineering. This makes sense given that Scotch whisky is a huge industry in Scotland, but given the increase in gin distilleries in the UK in the last 15 years, a Scotch focus was arguably remiss, something I sought to rectify. The IBD distilling program was initially based on the Heriot-Watt syllabus. As an international operator, the IBD felt that there was a need to move beyond Scotch and offered syllabus and examination options for other categories such as rum to satisfy their international demographic. At Oregon State University (OSU), neither approach seemed satisfactory, given that in Oregon virtually all of the common agricultural commodities used by distillers world-wide are used within a 500 mile radius of Corvallis. This includes traditional qu saccharification and fermentation of rice and the fermentation/distillation of agave juice. With these points in mind, we deconstructed distilling education to focus initially on raw material diversity, comparing

and contrasting required processes and timelines for the production of the major spirit categories. It is worth pointing out here that the distilling courses offered at OSU are at the “400” level, in common with brewing and wine courses, and require satisfactory performance in underpinning science and technology. This is in common with other university programs in alcoholic beverages, especially those offered at bachelor level. The range of raw materials employed by distillers means that “brewhouse process” variability is generally greater than that of the fermentation halls, and we primarily focus on yeast-based fermentations, together with the role of bacterial impact on fermentations and solid-state saccharification/ fermentation. We explore the collection of the spirit from the fermented base, both in terms of batch and continuous processes and include some theoretical material, not least the venerable McCabe-Thiele theory as an approximate method to design a continuous column. Distillation is rarely the