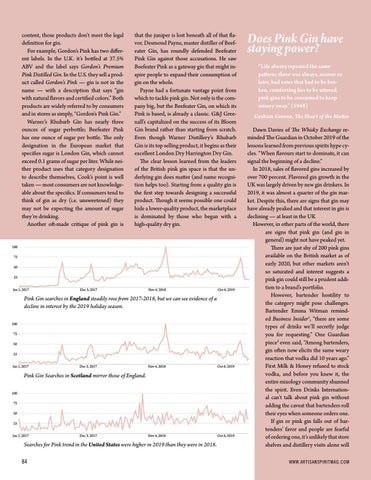 content, those products don’t meet the legal definition for gin. For example, Gordon’s Pink has two different labels. In the U.K. it’s bottled at 37.5% ABV and the label says Gordon’s Premium Pink Distilled Gin. In the U.S. they sell a product called Gordon’s Pink — gin is not in the name — with a description that says “gin with natural flavors and certified colors.” Both products are widely referred to by consumers and in stores as simply, “Gordon’s Pink Gin.” Warner’s Rhubarb Gin has nearly three ounces of sugar perbottle; Beefeater Pink has one ounce of sugar per bottle. The only designation in the European market that specifies sugar is London Gin, which cannot exceed 0.1 grams of sugar per liter. While neither product uses that category designation to describe themselves, Cook’s point is well taken — most consumers are not knowledgeable about the specifics. If consumers tend to think of gin as dry (i.e. unsweetened) they may not be expecting the amount of sugar they’re drinking. Another oft-made critique of pink gin is

that the juniper is lost beneath all of that flavor. Desmond Payne, master distiller of Beefeater Gin, has roundly defended Beefeater Pink Gin against those accusations. He saw Beefeater Pink as a gateway gin that might inspire people to expand their consumption of gin on the whole. Payne had a fortunate vantage point from which to tackle pink gin. Not only is the company big, but the Beefeater Gin, on which its Pink is based, is already a classic. G&J Greenall’s capitalized on the success of its Bloom Gin brand rather than starting from scratch. Even though Warner Distillery’s Rhubarb Gin is its top selling product, it begins as their excellent London Dry Harrington Dry Gin. The clear lesson learned from the leaders of the British pink gin space is that the underlying gin does matter (and name recognition helps too). Starting from a quality gin is the first step towards designing a successful product. Though it seems possible one could hide a lower-quality product, the marketplace is dominated by those who began with a high-quality dry gin.

Pink Gin searches in England steadily rose from 2017-2018, but we can see evidence of a decline in interest by the 2019 holiday season.

Pink Gin Searches in Scotland mirror those of England.

Does Pink Gin have staying power? “Life always repeated the same pattern; there was always, sooner or later, bad news that had to be broken, comforting lies to be uttered, pink gins to be consumed to keep misery away.” (1948) Graham Greene, The Heart of the Matter Dawn Davies of The Whisky Exchange reminded The Guardian in October 2019 of the lessons learned from previous spirits hype cycles. “When flavours start to dominate, it can signal the beginning of a decline.” In 2018, sales of flavored gins increased by over 700 percent. Flavored gin growth in the UK was largely driven by new gin drinkers. In 2019, it was almost a quarter of the gin market. Despite this, there are signs that gin may have already peaked and that interest in gin is declining — at least in the UK However, in other parts of the world, there are signs that pink gin (and gin in general) might not have peaked yet. There are just shy of 200 pink gins available on the British market as of early 2020, but other markets aren’t so saturated and interest suggests a pink gin could still be a prudent addition to a brand’s portfolio. However, bartender hostility to the category might pose challenges. Bartender Emma Witman reminded Business Insider1, “there are some types of drinks we’ll secretly judge you for requesting.” One Guardian piece2 even said, “Among bartenders, gin often now elicits the same weary reaction that vodka did 10 years ago.” First Milk & Honey refused to stock vodka, and before you knew it, the entire mixology community shunned the spirit. Even Drinks International can’t talk about pink gin without adding the caveat that bartenders roll their eyes when someone orders one. If gin or pink gin falls out of bartenders’ favor and people are fearful of ordering one, it’s unlikely that store shelves and distillery visits alone will WWW.ARTISANSPIRITMAG.COM