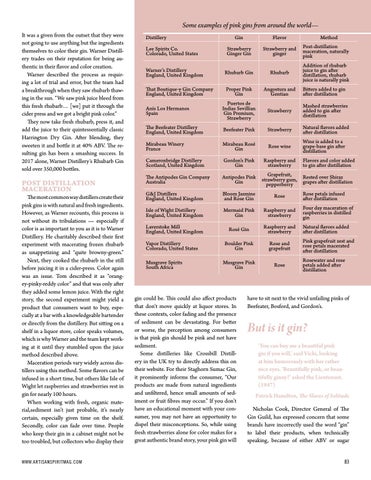 Some examples of pink gins from around the world— It was a given from the outset that they were not going to use anything but the ingredients themselves to color their gin. Warner Distillery trades on their reputation for being authentic in their flavor and color creation. Warner described the process as requiring a lot of trial and error, but the team had a breakthrough when they saw rhubarb thawing in the sun. “We saw pink juice bleed from this fresh rhubarb… [we] put it through the cider press and we got a bright pink color.” They now take fresh rhubarb, press it, and add the juice to their quintessentially classic Harrington Dry Gin. After blending, they sweeten it and bottle it at 40% ABV. The resulting gin has been a smashing success. In 2017 alone, Warner Distillery’s Rhubarb Gin sold over 350,000 bottles.

The most common way distillers create their pink gins is with natural and fresh ingredients. However, as Warner recounts, this process is not without its tribulations — especially if color is as important to you as it is to Warner Distillery. He charitably described their first experiment with macerating frozen rhubarb as unappetizing and “quite browny-green.” Next, they cooked the rhubarb in the still before juicing it in a cider-press. Color again was an issue. Tom described it as “orangey-pinky-reddy color” and that was only after they added some lemon juice. With the right story, the second experiment might yield a product that consumers want to buy, especially at a bar with a knowledgeable bartender or directly from the distillery. But sitting on a shelf in a liquor store, color speaks volumes, which is why Warner and the team kept working at it until they stumbled upon the juice method described above. Maceration periods vary widely across distillers using this method. Some flavors can be infused in a short time, but others like Isle of Wight let raspberries and strawberries rest in gin for nearly 100 hours. When working with fresh, organic material,sediment isn’t just probable, it’s nearly certain, especially given time on the shelf. Secondly, color can fade over time. People who keep their gin in a cabinet might not be too troubled, but collectors who display their WWW.ARTISANSPIRITMAG.COM

Bitters added to gin after distillation

Wine is added to a grape-base gin after distillation

Flavors and color added to gin after distillation

Rested over Shiraz grapes after distillation

gin could be. This could also affect products that don’t move quickly at liquor stores. In these contexts, color fading and the presence of sediment can be devastating. For better or worse, the perception among consumers is that pink gin should be pink and not have sediment. Some distilleries like Crossbill Distillery in the UK try to directly address this on their website. For their Staghorn Sumac Gin, it prominently informs the consumer, “Our products are made from natural ingredients and unfiltered, hence small amounts of sediment or fruit fibres may occur.” If you don’t have an educational moment with your consumer, you may not have an opportunity to dispel their misconceptions. So, while using fresh strawberries alone for color makes for a great authentic brand story, your pink gin will

have to sit next to the vivid unfailing pinks of Beefeater, Bosford, and Gordon’s.

But is it gin? ‘You can buy me a beautiful pink gin if you will,’ said Vicki, looking at him humorously with her rather nice eyes. ‘Beautifully pink, or beautifully ginny?’ asked the Lieutenant. (1947) Patrick Hamilton, The Slaves of Solitude Nicholas Cook, Director General of The Gin Guild, has expressed concern that some brands have incorrectly used the word “gin” to label their products, when technically speaking, because of either ABV or sugar 83