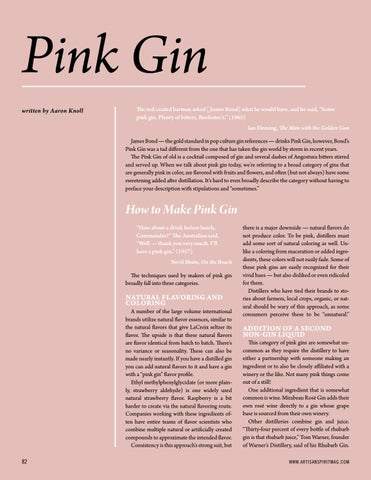 The red-coated barman asked [ James Bond] what he would have, and he said, “Some pink gin. Plenty of bitters, Beefeater’s.” (1965) Ian Fleming, The Man with the Golden Gun James Bond — the gold standard in pop culture gin references — drinks Pink Gin, however, Bond’s Pink Gin was a tad different from the one that has taken the gin world by storm in recent years. The Pink Gin of old is a cocktail composed of gin and several dashes of Angostura bitters stirred and served up. When we talk about pink gin today, we’re referring to a broad category of gins that are generally pink in color, are flavored with fruits and flowers, and often (but not always) have some sweetening added after distillation. It’s hard to even broadly describe the category without having to preface your description with stipulations and “sometimes.”

How to Make Pink Gin “How about a drink before lunch, Commander?” The Australian said, “Well — thank you very much. I’ll have a pink gin.” (1957) Nevil Shute, On the Beach The techniques used by makers of pink gin broadly fall into three categories.

A number of the large volume international brands utilize natural flavor essences, similar to the natural flavors that give LaCroix seltzer its flavor. The upside is that these natural flavors are flavor identical from batch to batch. There’s no variance or seasonality. These can also be made nearly instantly. If you have a distilled gin you can add natural flavors to it and have a gin with a “pink gin” flavor profile. Ethyl methylphenylglycidate (or more plainly, strawberry aldehyde) is one widely used natural strawberry flavor. Raspberry is a bit harder to create via the natural flavoring route. Companies working with these ingredients often have entire teams of flavor scientists who combine multiple natural or artificially created compounds to approximate the intended flavor. Consistency is this approach’s strong suit, but 82

there is a major downside — natural flavors do not produce color. To be pink, distillers must add some sort of natural coloring as well. Unlike a coloring from maceration or added ingredients, these colors will not easily fade. Some of these pink gins are easily recognized for their vivid hues — but also disliked or even ridiculed for them. Distillers who have tied their brands to stories about farmers, local crops, organic, or natural should be wary of this approach, as some consumers perceive these to be “unnatural.”

ADDITION OF A SECOND NON-GIN LIQUID

This category of pink gins are somewhat uncommon as they require the distillery to have either a partnership with someone making an ingredient or to also be closely affiliated with a winery or the like. Not many pink things come out of a still! One additional ingredient that is somewhat common is wine. Mirabeau Rosé Gin adds their own rosé wine directly to a gin whose grape base is sourced from their own winery. Other distilleries combine gin and juice. “Thirty-four percent of every bottle of rhubarb gin is that rhubarb juice,” Tom Warner, founder of Warner’s Distillery, said of his Rhubarb Gin. WWW.ARTISANSPIRITMAG.COM