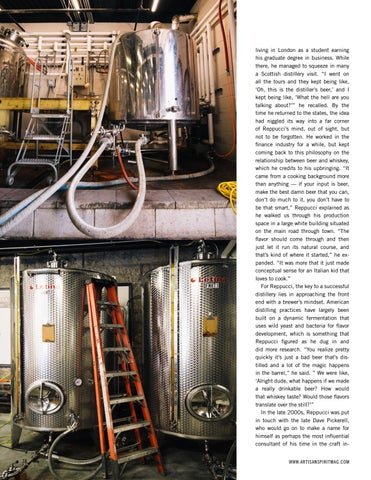 living in London as a student earning his graduate degree in business. While there, he managed to squeeze in many a Scottish distillery visit. “I went on all the tours and they kept being like, ‘Oh, this is the distiller’s beer,’ and I kept being like, ‘What the hell are you talking about?’” he recalled. By the time he returned to the states, the idea had niggled its way into a far corner of Reppucci’s mind, out of sight, but not to be forgotten. He worked in the finance industry for a while, but kept coming back to this philosophy on the relationship between beer and whiskey, which he credits to his upbringing. “It came from a cooking background more than anything — if your input is beer, make the best damn beer that you can, don’t do much to it, you don’t have to be that smart,” Reppucci explained as he walked us through his production space in a large white building situated on the main road through town. “The flavor should come through and then just let it run its natural course, and that’s kind of where it started,” he expanded. “It was more that it just made conceptual sense for an Italian kid that loves to cook.” For Reppucci, the key to a successful distillery lies in approaching the front end with a brewer’s mindset. American distilling practices have largely been built on a dynamic fermentation that uses wild yeast and bacteria for flavor development, which is something that Reppucci figured as he dug in and did more research. “You realize pretty quickly it’s just a bad beer that’s distilled and a lot of the magic happens in the barrel,” he said. ” We were like, ‘Alright dude, what happens if we made a really drinkable beer? How would that whiskey taste? Would those flavors translate over the still?’” In the late 2000s, Reppucci was put in touch with the late Dave Pickerell, who would go on to make a name for himself as perhaps the most influential consultant of his time in the craft in-