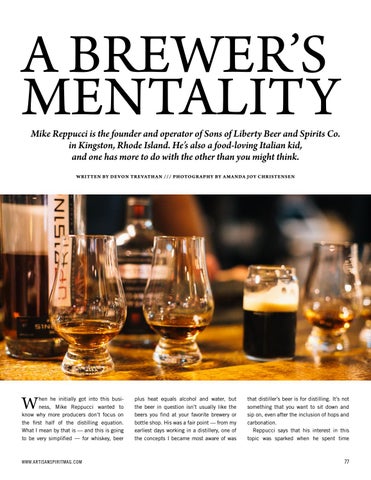 Mike Reppucci is the founder and operator of Sons of Liberty Beer and Spirits Co. in Kingston, Rhode Island. He’s also a food-loving Italian kid, and one has more to do with the other than you might think. WRITTEN BY DEVON TREVATHAN /// PHOTOGR APHY BY AMANDA JOY CHRISTENSEN

hen he initially got into this business, Mike Reppucci wanted to know why more producers don’t focus on the first half of the distilling equation. What I mean by that is — and this is going to be very simplified — for whiskey, beer

plus heat equals alcohol and water, but the beer in question isn’t usually like the beers you find at your favorite brewery or bottle shop. His was a fair point — from my earliest days working in a distillery, one of the concepts I became most aware of was

that distiller’s beer is for distilling. It’s not something that you want to sit down and sip on, even after the inclusion of hops and carbonation. Reppucci says that his interest in this topic was sparked when he spent time