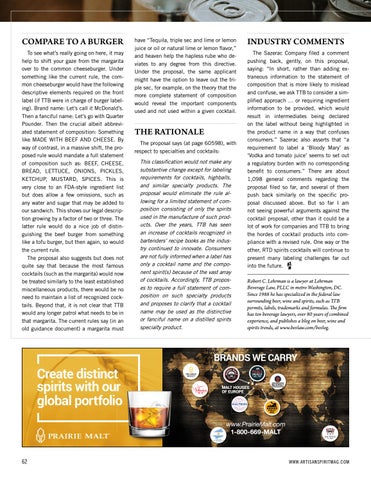 COMPARE TO A BURGER To see what’s really going on here, it may help to shift your gaze from the margarita over to the common cheeseburger. Under something like the current rule, the common cheeseburger would have the following descriptive elements required on the front label (if TTB were in charge of burger labeling). Brand name: Let’s call it McDonald’s. Then a fanciful name: Let’s go with Quarter Pounder. Then the crucial albeit abbreviated statement of composition: Something like MADE WITH BEEF AND CHEESE. By way of contrast, in a massive shift, the proposed rule would mandate a full statement of composition such as: BEEF, CHEESE, BREAD, LETTUCE, ONIONS, PICKLES, KETCHUP, MUSTARD, SPICES. This is very close to an FDA-style ingredient list but does allow a few omissions, such as any water and sugar that may be added to our sandwich. This shows our legal description growing by a factor of two or three. The latter rule would do a nice job of distinguishing the beef burger from something like a tofu burger, but then again, so would the current rule. The proposal also suggests but does not quite say that because the most famous cocktails (such as the margarita) would now be treated similarly to the least established miscellaneous products, there would be no need to maintain a list of recognized cocktails. Beyond that, it is not clear that TTB would any longer patrol what needs to be in that margarita. The current rules say (in an old guidance document) a margarita must

have “Tequila, triple sec and lime or lemon juice or oil or natural lime or lemon flavor,” and heaven help the hapless rube who deviates to any degree from this directive. Under the proposal, the same applicant might have the option to leave out the triple sec, for example, on the theory that the more complete statement of composition would reveal the important components used and not used within a given cocktail.

THE RATIONALE The proposal says (at page 60598), with respect to specialties and cocktails:

This classification would not make any substantive change except for labeling requirements for cocktails, highballs, and similar specialty products. The proposal would eliminate the rule allowing for a limited statement of composition consisting of only the spirits used in the manufacture of such products. Over the years, TTB has seen an increase of cocktails recognized in bartenders’ recipe books as the industry continued to innovate. Consumers are not fully informed when a label has only a cocktail name and the component spirit(s) because of the vast array of cocktails. Accordingly, TTB proposes to require a full statement of composition on such specialty products and proposes to clarify that a cocktail name may be used as the distinctive or fanciful name on a distilled spirits specialty product.

INDUSTRY COMMENTS The Sazerac Company filed a comment pushing back, gently, on this proposal, saying: “In short, rather than adding extraneous information to the statement of composition that is more likely to mislead and confuse, we ask TTB to consider a simplified approach … or requiring ingredient information to be provided, which would result in intermediates being declared on the label without being highlighted in the product name in a way that confuses consumers.” Sazerac also asserts that “a requirement to label a ‘Bloody Mary’ as ‘Vodka and tomato juice’ seems to set out a regulatory burden with no corresponding benefit to consumers.” There are about 1,098 general comments regarding the proposal filed so far, and several of them push back similarly on the specific proposal discussed above. But so far I am not seeing powerful arguments against the cocktail proposal, other than it could be a lot of work for companies and TTB to bring the hordes of cocktail products into compliance with a revised rule. One way or the other, RTD spirits cocktails will continue to present many labeling challenges far out into the future. Robert C. Lehrman is a lawyer at Lehrman Beverage Law, PLLC in metro Washington, DC. Since 1988 he has specialized in the federal law surrounding beer, wine and spirits, such as TTB permits, labels, trademarks and formulas. The firm has ten beverage lawyers, over 80 years of combined experience, and publishes a blog on beer, wine and spirits trends, at www.bevlaw.com/bevlog.