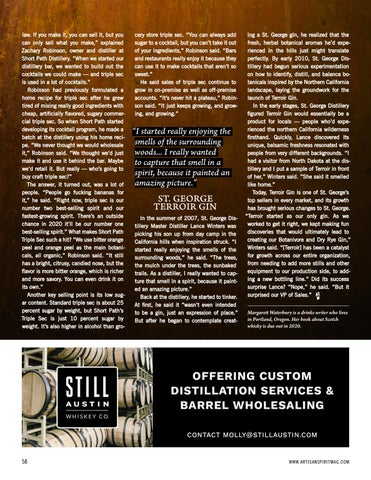 law. If you make it, you can sell it, but you can only sell what you make,” explained Zachary Robinson, owner and distiller at Short Path Distillery. “When we started our distillery bar, we wanted to build out the cocktails we could make — and triple sec is used in a lot of cocktails.” Robinson had previously formulated a home recipe for triple sec after he grew tired of mixing really good ingredients with cheap, artificially flavored, sugary commercial triple sec. So when Short Path started developing its cocktail program, he made a batch at the distillery using his home recipe. “We never thought we would wholesale it,” Robinson said. “We thought we’d just make it and use it behind the bar. Maybe we’d retail it. But really — who’s going to buy craft triple sec?” The answer, it turned out, was a lot of people. “People go fucking bananas for it,” he said. “Right now, triple sec is our number two best-selling spirit and our fastest-growing spirit. There’s an outside chance in 2020 it’ll be our number one best-selling spirit.” What makes Short Path Triple Sec such a hit? “We use bitter orange peel and orange peel as the main botanicals, all organic,” Robinson said. “It still has a bright, citrusy, candied nose, but the flavor is more bitter orange, which is richer and more savory. You can even drink it on its own.” Another key selling point is its low sugar content. Standard triple sec is about 25 percent sugar by weight, but Short Path’s Triple Sec is just 10 percent sugar by weight. It’s also higher in alcohol than gro-

cery store triple sec. “You can always add sugar to a cocktail, but you can’t take it out of your ingredients,” Robinson said. “Bars and restaurants really enjoy it because they can use it to make cocktails that aren’t so sweet.” He said sales of triple sec continue to grow in on-premise as well as off-premise accounts. “It’s never hit a plateau,” Robinson said. “It just keeps growing, and growing, and growing.”

“I started really enjoying the smells of the surrounding woods... I really wanted to capture that smell in a spirit, because it painted an amazing picture.”

ST. GEORGE TERROIR GIN In the summer of 2007, St. George Distillery Master Distiller Lance Winters was picking his son up from day camp in the California hills when inspiration struck. “I started really enjoying the smells of the surrounding woods,” he said. “The trees, the mulch under the trees, the sunbaked trails. As a distiller, I really wanted to capture that smell in a spirit, because it painted an amazing picture.” Back at the distillery, he started to tinker. At first, he said it “wasn’t even intended to be a gin, just an expression of place.” But after he began to contemplate creat-

ing a St. George gin, he realized that the fresh, herbal botanical aromas he’d experienced in the hills just might translate perfectly. By early 2010, St. George Distillery had begun serious experimentation on how to identify, distill, and balance botanicals inspired by the Northern California landscape, laying the groundwork for the launch of Terroir Gin. In the early stages, St. George Distillery figured Terroir Gin would essentially be a product for locals — people who’d experienced the northern California wilderness firsthand. Quickly, Lance discovered its unique, balsamic freshness resonated with people from very different backgrounds. “I had a visitor from North Dakota at the distillery and I put a sample of Terroir in front of her,” Winters said. “She said it smelled like home.” Today, Terroir Gin is one of St. George’s top sellers in every market, and its growth has brought serious changes to St. George. “Terroir started as our only gin. As we worked to get it right, we kept making fun discoveries that would ultimately lead to creating our Botanivore and Dry Rye Gin,” Winters said. “[Terroir] has been a catalyst for growth across our entire organization, from needing to add more stills and other equipment to our production side, to adding a new bottling line.” Did its success surprise Lance? “Nope,” he said. “But it surprised our VP of Sales.” Margarett Waterbury is a drinks writer who lives in Portland, Oregon. Her book about Scotch whisky is due out in 2020.