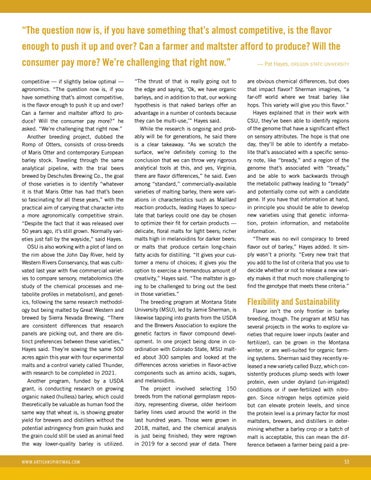 “The thrust of that is really going out to the edge and saying, ‘Ok, we have organic barleys, and in addition to that, our working hypothesis is that naked barleys offer an advantage in a number of contexts because they can be multi-use,’” Hayes said. While the research is ongoing and probably will be for generations, he said there is a clear takeaway. “As we scratch the surface, we’re definitely coming to the conclusion that we can throw very rigorous analytical tools at this, and yes, Virginia, there are flavor differences,” he said. Even among “standard,” commercially-available varieties of malting barley, there were variations in characteristics such as Maillard reaction products, leading Hayes to speculate that barleys could one day be chosen to optimize their fit for certain products — delicate, floral malts for light beers; richer malts high in melanoidins for darker beers; or malts that produce certain long-chain fatty acids for distilling. “It gives your customer a menu of choices; it gives you the option to exercise a tremendous amount of creativity,” Hayes said. “The maltster is going to be challenged to bring out the best in those varieties.” The breeding program at Montana State University (MSU), led by Jamie Sherman, is likewise tapping into grants from the USDA and the Brewers Association to explore the genetic factors in flavor compound development. In one project being done in coordination with Colorado State, MSU malted about 300 samples and looked at the differences across varieties in flavor-active components such as amino acids, sugars, and melanoidins. The project involved selecting 150 breeds from the national germplasm repository, representing diverse, older heirloom barley lines used around the world in the last hundred years. Those were grown in 2018, malted, and the chemical analysis is just being finished; they were regrown in 2019 for a second year of data. There

— Pat Hayes, OREGON STATE UNIVERSITY are obvious chemical differences, but does that impact flavor? Sherman imagines, “a far-off world where we treat barley like hops. This variety will give you this flavor.” Hayes explained that in their work with CSU, they’ve been able to identify regions of the genome that have a significant effect on sensory attributes. The hope is that one day, they’ll be able to identify a metabolite that’s associated with a specific sensory note, like “bready,” and a region of the genome that’s associated with “bready,” and be able to work backwards through the metabolic pathway leading to “bready” and potentially come out with a candidate gene. If you have that information at hand, in principle you should be able to develop new varieties using that genetic information, protein information, and metabolite information. “There was no evil conspiracy to breed flavor out of barley,” Hayes added. It simply wasn’t a priority. “Every new trait that you add to the list of criteria that you use to decide whether or not to release a new variety makes it that much more challenging to find the genotype that meets these criteria.”

Flexibility and Sustainability Flavor isn’t the only frontier in barley breeding, though. The program at MSU has several projects in the works to explore varieties that require lower inputs (water and fertilizer), can be grown in the Montana winter, or are well-suited for organic farming systems. Sherman said they recently released a new variety called Buzz, which consistently produces plump seeds with lower protein, even under dryland (un-irrigated) conditions or if over-fertilized with nitrogen. Since nitrogen helps optimize yield but can elevate protein levels, and since the protein level is a primary factor for most maltsters, brewers, and distillers in determining whether a barley crop or a batch of malt is acceptable, this can mean the difference between a farmer being paid a pre-