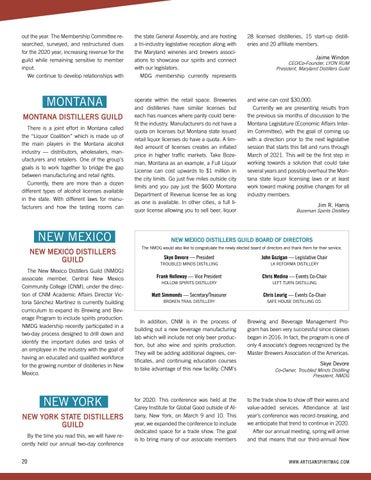 out the year. The Membership Committee researched, surveyed, and restructured dues for the 2020 year, increasing revenue for the guild while remaining sensitive to member input. We continue to develop relationships with

MONTANA MONTANA DISTILLERS GUILD There is a joint effort in Montana called the “Liquor Coalition” which is made up of the main players in the Montana alcohol industry — distributors, wholesalers, manufacturers and retailers. One of the group’s goals is to work together to bridge the gap between manufacturing and retail rights. Currently, there are more than a dozen different types of alcohol licenses available in the state. With different laws for manufacturers and how the tasting rooms can

NEW MEXICO NEW MEXICO DISTILLERS GUILD The New Mexico Distillers Guild (NMDG) associate member, Central New Mexico Community College (CNM), under the direction of CNM Academic Affairs Director Victoria Sánchez Martínez is currently building curriculum to expand its Brewing and Beverage Program to include spirits production. NMDG leadership recently participated in a two-day process designed to drill down and identify the important duties and tasks of an employee in the industry with the goal of having an educated and qualified workforce for the growing number of distilleries in New Mexico.

NEW YORK NEW YORK STATE DISTILLERS GUILD By the time you read this, we will have recently held our annual two-day conference

the state General Assembly, and are hosting a tri-industry legislative reception along with the Maryland wineries and brewers associations to showcase our spirits and connect with our legislators. MDG membership currently represents

operate within the retail space. Breweries and distilleries have similar licenses but each has nuances where parity could benefit the industry. Manufacturers do not have a quota on licenses but Montana state issued retail liquor licenses do have a quota. A limited amount of licenses creates an inflated price in higher traffic markets. Take Bozeman, Montana as an example, a Full Liquor License can cost upwards to $1 million in the city limits. Go just five miles outside city limits and you pay just the $600 Montana Department of Revenue license fee as long as one is available. In other cities, a full liquor license allowing you to sell beer, liquor

and wine can cost $30,000. Currently we are presenting results from the previous six months of discussion to the Montana Legislature (Economic Affairs Interim Committee), with the goal of coming up with a direction prior to the next legislative session that starts this fall and runs through March of 2021. This will be the first step in working towards a solution that could take several years and possibly overhaul the Montana state liquor licensing laws or at least work toward making positive changes for all industry members.

NEW MEXICO DISTILLERS GUILD BOARD OF DIRECTORS The NMDG would also like to congratulate the newly elected board of directors and thank them for their service.

In addition, CNM is in the process of building out a new beverage manufacturing lab which will include not only beer production, but also wine and spirits production. They will be adding additional degrees, certificates, and continuing education courses to take advantage of this new facility. CNM's

Brewing and Beverage Management Program has been very successful since classes began in 2016. In fact, the program is one of only 4 associate’s degrees recognized by the Master Brewers Association of the Americas.

for 2020. This conference was held at the Carey Institute for Global Good outside of Albany, New York, on March 9 and 10. This year, we expanded the conference to include dedicated space for a trade show. The goal is to bring many of our associate members

to the trade show to show off their wares and value-added services. Attendance at last year’s conference was record-breaking, and we anticipate that trend to continue in 2020. After our annual meeting, spring will arrive and that means that our third-annual New