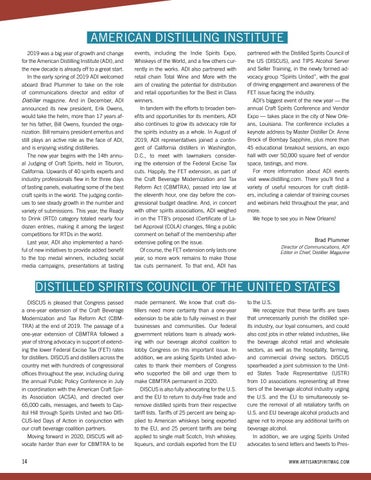 AMERICAN DISTILLING INSTITUTE 2019 was a big year of growth and change for the American Distilling Institute (ADI), and the new decade is already off to a great start. In the early spring of 2019 ADI welcomed aboard Brad Plummer to take on the role of communications director and editor of Distiller magazine. And in December, ADI announced its new president, Erik Owens, would take the helm, more than 17 years after his father, Bill Owens, founded the organization. Bill remains president emeritus and still plays an active role as the face of ADI, and is enjoying visiting distilleries. The new year begins with the 14th annual Judging of Craft Spirits, held in Tiburon, California. Upwards of 40 spirits experts and industry professionals flew in for three days of tasting panels, evaluating some of the best craft spirits in the world. The judging continues to see steady growth in the number and variety of submissions. This year, the Ready to Drink (RTD) category totaled nearly four dozen entries, making it among the largest competitions for RTDs in the world. Last year, ADI also implemented a handful of new initiatives to provide added benefit to the top medal winners, including social media campaigns, presentations at tasting

events, including the Indie Spirits Expo, Whiskeys of the World, and a few others currently in the works. ADI also partnered with retail chain Total Wine and More with the aim of creating the potential for distribution and retail opportunities for the Best in Class winners. In tandem with the efforts to broaden benefits and opportunities for its members, ADI also continues to grow its advocacy role for the spirits industry as a whole. In August of 2019, ADI representatives joined a contingent of California distillers in Washington, D.C., to meet with lawmakers considering the extension of the Federal Excise Tax cuts. Happily, the FET extension, as part of the Craft Beverage Modernization and Tax Reform Act (CBMTRA), passed into law at the eleventh hour, one day before the congressional budget deadline. And, in concert with other spirits associations, ADI weighed in on the TTB’s proposed (Certificate of Label Approval (COLA) changes, filing a public comment on behalf of the membership after extensive polling on the issue. Of course, the FET extension only lasts one year, so more work remains to make those tax cuts permanent. To that end, ADI has

partnered with the Distilled Spirits Council of the US (DISCUS), and TIPS Alcohol Server and Seller Training, in the newly formed advocacy group “Spirits United”, with the goal of driving engagement and awareness of the FET issue facing the industry. ADI’s biggest event of the new year — the annual Craft Spirits Conference and Vendor Expo — takes place in the city of New Orleans, Louisiana. The conference includes a keynote address by Master Distiller Dr. Anne Brock of Bombay Sapphire, plus more than 45 educational breakout sessions, an expo hall with over 50,000 square feet of vendor space, tastings, and more. For more information about ADI events visit www.distilling.com. There you’ll find a variety of useful resources for craft distillers, including a calendar of training courses and webinars held throughout the year, and more. We hope to see you in New Orleans!

DISTILLED SPIRITS COUNCIL OF THE UNITED STATES DISCUS is pleased that Congress passed a one-year extension of the Craft Beverage Modernization and Tax Reform Act (CBMTRA) at the end of 2019. The passage of a one-year extension of CBMTRA followed a year of strong advocacy in support of extending the lower Federal Excise Tax (FET) rates for distillers. DISCUS and distillers across the country met with hundreds of congressional offices throughout the year, including during the annual Public Policy Conference in July in coordination with the American Craft Spirits Association (ACSA), and directed over 65,000 calls, messages, and tweets to Capitol Hill through Spirits United and two DISCUS-led Days of Action in conjunction with our craft beverage coalition partners. Moving forward in 2020, DISCUS will advocate harder than ever for CBMTRA to be

made permanent. We know that craft distillers need more certainty than a one-year extension to be able to fully reinvest in their businesses and communities. Our federal government relations team is already working with our beverage alcohol coalition to lobby Congress on this important issue. In addition, we are asking Spirits United advocates to thank their members of Congress who supported the bill and urge them to make CBMTRA permanent in 2020. DISCUS is also fully advocating for the U.S. and the EU to return to duty-free trade and remove distilled spirits from their respective tariff lists. Tariffs of 25 percent are being applied to American whiskeys being exported to the EU, and 25 percent tariffs are being applied to single malt Scotch, Irish whiskey, liqueurs, and cordials exported from the EU

to the U.S. We recognize that these tariffs are taxes that unnecessarily punish the distilled spirits industry, our loyal consumers, and could also cost jobs in other related industries, like the beverage alcohol retail and wholesale sectors, as well as the hospitality, farming, and commercial driving sectors. DISCUS spearheaded a joint submission to the United States Trade Representative (USTR) from 10 associations representing all three tiers of the beverage alcohol industry urging the U.S. and the EU to simultaneously secure the removal of all retaliatory tariffs on U.S. and EU beverage alcohol products and agree not to impose any additional tariffs on beverage alcohol. In addition, we are urging Spirits United advocates to send letters and tweets to PresWWW.ARTISANSPIRITMAG.COM