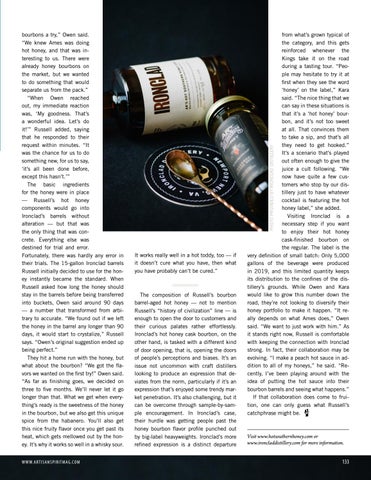 from what’s grown typical of the category, and this gets reinforced whenever the Kings take it on the road during a tasting tour. “People may hesitate to try it at first when they see the word ‘honey’ on the label,” Kara said. “The nice thing that we can say in these situations is that it’s a ‘hot honey’ bourbon, and it’s not too sweet at all. That convinces them to take a sip, and that’s all they need to get hooked.” It’s a scenario that’s played out often enough to give the juice a cult following. “We now have quite a few customers who stop by our distillery just to have whatever cocktail is featuring the hot honey label,” she added. Visiting Ironclad is a necessary step if you want to enjoy their hot honey cask-finished bourbon on the regular. The label is the very definition of small batch: Only 5,000 gallons of the beverage were produced in 2019, and this limited quantity keeps its distribution to the confines of the distillery’s grounds. While Owen and Kara would like to grow this number down the road, they’re not looking to diversify their honey portfolio to make it happen. “It really depends on what Ames does,” Owen said. “We want to just work with him.” As it stands right now, Russell is comfortable with keeping the connection with Ironclad strong. In fact, their collaboration may be evolving. “I make a peach hot sauce in addition to all of my honeys,” he said. “Recently, I’ve been playing around with the idea of putting the hot sauce into their bourbon barrels and seeing what happens.” If that collaboration does come to fruition, one can only guess what Russell’s catchphrase might be. PHOTO PROVIDED BY IRONCLAD DISTILLERY

bourbons a try,” Owen said. “We knew Ames was doing hot honey, and that was interesting to us. There were already honey bourbons on the market, but we wanted to do something that would separate us from the pack.” “When Owen reached out, my immediate reaction was, ‘My goodness. That’s a wonderful idea. Let’s do it!’” Russell added, saying that he responded to their request within minutes. “It was the chance for us to do something new, for us to say, ‘it’s all been done before, except this hasn’t.’” The basic ingredients for the honey were in place — Russell’s hot honey components would go into Ironclad’s barrels without alteration — but that was the only thing that was concrete. Everything else was destined for trial and error. Fortunately, there was hardly any error in their trials. The 15-gallon Ironclad barrels Russell initially decided to use for the honey instantly became the standard. When Russell asked how long the honey should stay in the barrels before being transferred into buckets, Owen said around 90 days — a number that transformed from arbitrary to accurate. “We found out if we left the honey in the barrel any longer than 90 days, it would start to crystalize,” Russell says. “Owen’s original suggestion ended up being perfect.” They hit a home run with the honey, but what about the bourbon? “We got the flavors we wanted on the first try!” Owen said. “As far as finishing goes, we decided on three to five months. We’ll never let it go longer than that. What we get when everything’s ready is the sweetness of the honey in the bourbon, but we also get this unique spice from the habanero. You’ll also get this nice fruity flavor once you get past its heat, which gets mellowed out by the honey. It’s why it works so well in a whisky sour.

It works really well in a hot toddy, too — if it doesn’t cure what you have, then what you have probably can’t be cured.”

The composition of Russell’s bourbon barrel-aged hot honey — not to mention Russell’s “history of civilization” line — is enough to open the door to customers and their curious palates rather effortlessly. Ironclad’s hot honey cask bourbon, on the other hand, is tasked with a different kind of door opening, that is, opening the doors of people’s perceptions and biases. It’s an issue not uncommon with craft distillers looking to produce an expression that deviates from the norm, particularly if it’s an expression that’s enjoyed some trendy market penetration. It’s also challenging, but it can be overcome through sample-by-sample encouragement. In Ironclad’s case, their hurdle was getting people past the honey bourbon flavor profile punched out by big-label heavyweights. Ironclad’s more refined expression is a distinct departure