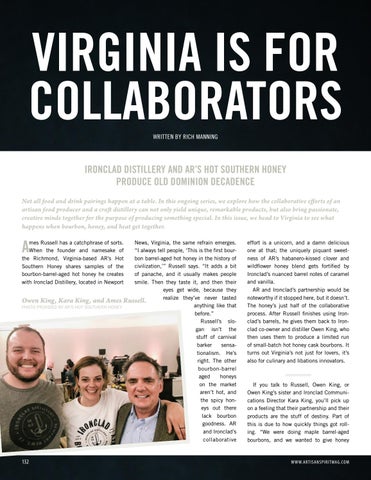 VIRGINIA IS FOR COLLABORATORS WRITTEN BY RICH MANNING

IRONCLAD DISTILLERY AND AR’S HOT SOUTHERN HONEY PRODUCE OLD DOMINION DECADENCE Not all food and drink pairings happen at a table. In this ongoing series, we explore how the collaborative efforts of an artisan food producer and a craft distillery can not only yield unique, remarkable products, but also bring passionate, creative minds together for the purpose of producing something special. In this issue, we head to Virginia to see what happens when bourbon, honey, and heat get together.

News, Virginia, the same refrain emerges. “I always tell people, ‘This is the first bourbon barrel-aged hot honey in the history of civilization,’” Russell says. “It adds a bit of panache, and it usually makes people smile. Then they taste it, and then their eyes get wide, because they realize they’ve never tasted Owen King, Kara King, and Ames Russell. anything like that PHOTO PROVIDED BY AR’S HOT SOUTHERN HONEY before.” Russell’s slogan isn’t the stuff of carnival barker sensationalism. He’s right. The other bourbon-barrel aged honeys on the market aren’t hot, and the spicy honeys out there lack bourbon goodness. AR and Ironclad’s collaborative mes Russell has a catchphrase of sorts. When the founder and namesake of the Richmond, Virginia-based AR’s Hot Southern Honey shares samples of the bourbon-barrel-aged hot honey he creates with Ironclad Distillery, located in Newport

effort is a unicorn, and a damn delicious one at that; the uniquely piquant sweetness of AR’s habanero-kissed clover and wildflower honey blend gets fortified by Ironclad’s nuanced barrel notes of caramel and vanilla. AR and Ironclad’s partnership would be noteworthy if it stopped here, but it doesn’t. The honey’s just half of the collaborative process. After Russell finishes using Ironclad’s barrels, he gives them back to Ironclad co-owner and distiller Owen King, who then uses them to produce a limited run of small-batch hot honey cask bourbons. It turns out Virginia’s not just for lovers, it’s also for culinary and libations innovators.

If you talk to Russell, Owen King, or Owen King’s sister and Ironclad Communications Director Kara King, you’ll pick up on a feeling that their partnership and their products are the stuff of destiny. Part of this is due to how quickly things got rolling. “We were doing maple barrel-aged bourbons, and we wanted to give honey