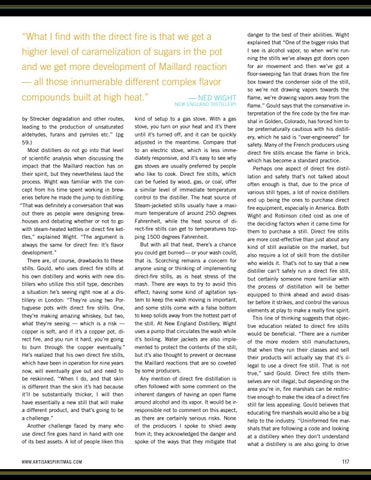 “What I find with the direct fire is that we get a higher level of caramelization of sugars in the pot and we get more development of Maillard reaction — all those innumerable different complex flavor compounds built at high heat.” 

by Strecker degradation and other routes, leading to the production of unsaturated aldehydes, furans and pyrroles etc.” (pg 59.) Most distillers do not go into that level of scientific analysis when discussing the impact that the Maillard reaction has on their spirit, but they nevertheless laud the process. Wight was familiar with the concept from his time spent working in breweries before he made the jump to distilling. “That was definitely a conversation that was out there as people were designing brewhouses and debating whether or not to go with steam-heated kettles or direct fire kettles,” explained Wight. “The argument is always the same for direct fire: It’s flavor development.” There are, of course, drawbacks to these stills. Gould, who uses direct fire stills at his own distillery and works with new distillers who utilize this still type, describes a situation he’s seeing right now at a distillery in London: “They’re using two Portuguese pots with direct fire stills. One, they’re making amazing whiskey, but two, what they’re seeing — which is a risk — copper is soft, and if it’s a copper pot, direct fire, and you run it hard, you’re going to burn through the copper eventually.” He’s realized that his own direct fire stills, which have been in operation for nine years now, will eventually give out and need to be reskinned. “When I do, and that skin is different than the skin it’s had because it’ll be substantially thicker, I will then have essentially a new still that will make a different product, and that’s going to be a challenge.” Another challenge faced by many who use direct fire goes hand in hand with one of its best assets. A lot of people liken this WWW.ARTISANSPIRITMAG.COM

kind of setup to a gas stove. With a gas stove, you turn on your heat and it’s there until it’s turned off, and it can be quickly adjusted in the meantime. Compare that to an electric stove, which is less immediately responsive, and it’s easy to see why gas stoves are usually preferred by people who like to cook. Direct fire stills, which can be fueled by wood, gas, or coal, offer a similar level of immediate temperature control to the distiller. The heat source of Steam-jacketed stills usually have a maximum temperature of around 250 degrees Fahrenheit, while the heat source of direct-fire stills can get to temperatures topping 1500 degrees Fahrenheit. But with all that heat, there’s a chance you could get burned— or your wash could, that is. Scorching remains a concern for anyone using or thinking of implementing direct-fire stills, as is heat stress of the mash. There are ways to try to avoid this effect; having some kind of agitation system to keep the wash moving is important, and some stills come with a false bottom to keep solids away from the hottest part of the still. At New England Distillery, Wight uses a pump that circulates the wash while it’s boiling. Water jackets are also implemented to protect the contents of the still, but it’s also thought to prevent or decrease the Maillard reactions that are so coveted by some producers. Any mention of direct fire distillation is often followed with some comment on the inherent dangers of having an open flame around alcohol and its vapor. It would be irresponsible not to comment on this aspect, as there are certainly serious risks. None of the producers I spoke to shied away from it; they acknowledged the danger and spoke of the ways that they mitigate that

danger to the best of their abilities. Wight explained that “One of the bigger risks that I see is alcohol vapor, so when we’re running the stills we’ve always got doors open for air movement and then we’ve got a floor-sweeping fan that draws from the fire box toward the condenser side of the still, so we’re not drawing vapors towards the flame, we’re drawing vapors away from the flame.” Gould says that the conservative interpretation of the fire code by the fire marshal in Golden, Colorado, has forced him to be preternaturally cautious with his distillery, which he said is “over-engineered” for safety. Many of the French producers using direct fire stills encase the flame in brick, which has become a standard practice. Perhaps one aspect of direct fire distillation and safety that’s not talked about often enough is that, due to the price of various still types, a lot of novice distillers end up being the ones to purchase direct fire equipment, especially in America. Both Wight and Robinson cited cost as one of the deciding factors when it came time for them to purchase a still. Direct fire stills are more cost-effective than just about any kind of still available on the market, but also require a lot of skill from the distiller who wields it. That’s not to say that a new distiller can’t safely run a direct fire still, but certainly someone more familiar with the process of distillation will be better equipped to think ahead and avoid disaster before it strikes, and control the various elements at play to make a really fine spirit. This line of thinking suggests that objective education related to direct fire stills would be beneficial. “There are a number of the more modern still manufacturers, that when they run their classes and sell their products will actually say that it’s illegal to use a direct fire still. That is not true,” said Gould. Direct fire stills themselves are not illegal, but depending on the area you’re in, fire marshals can be restrictive enough to make the idea of a direct fire still far less appealing. Gould believes that educating fire marshals would also be a big help to the industry. “Uninformed fire marshals that are following a code and looking at a distillery when they don’t understand what a distillery is are also going to drive