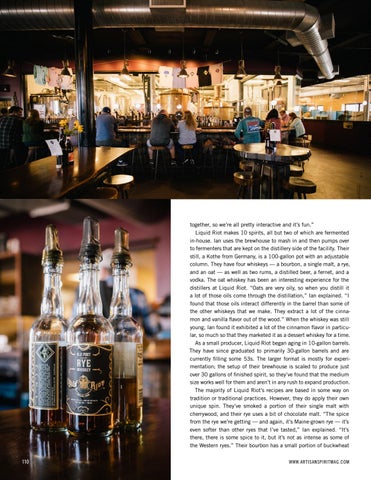 together, so we’re all pretty interactive and it’s fun.” Liquid Riot makes 10 spirits, all but two of which are fermented in-house. Ian uses the brewhouse to mash in and then pumps over to fermenters that are kept on the distillery side of the facility. Their still, a Kothe from Germany, is a 100-gallon pot with an adjustable column. They have four whiskeys — a bourbon, a single malt, a rye, and an oat — as well as two rums, a distilled beer, a fernet, and a vodka. The oat whiskey has been an interesting experience for the distillers at Liquid Riot. “Oats are very oily, so when you distill it a lot of those oils come through the distillation,” Ian explained. “I found that those oils interact differently in the barrel than some of the other whiskeys that we make. They extract a lot of the cinnamon and vanilla flavor out of the wood.” When the whiskey was still young, Ian found it exhibited a lot of the cinnamon flavor in particular, so much so that they marketed it as a dessert whiskey for a time. As a small producer, Liquid Riot began aging in 10-gallon barrels. They have since graduated to primarily 30-gallon barrels and are currently filling some 53s. The larger format is mostly for experimentation; the setup of their brewhouse is scaled to produce just over 30 gallons of finished spirit, so they’ve found that the medium size works well for them and aren’t in any rush to expand production. The majority of Liquid Riot’s recipes are based in some way on tradition or traditional practices. However, they do apply their own unique spin. They’ve smoked a portion of their single malt with cherrywood, and their rye uses a bit of chocolate malt. “The spice from the rye we’re getting — and again, it’s Maine-grown rye — it’s even softer than other ryes that I’ve tasted,” Ian explained. “It’s there, there is some spice to it, but it’s not as intense as some of the Western ryes.” Their bourbon has a small portion of buckwheat