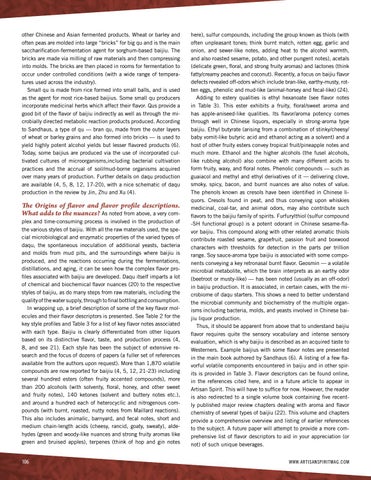 other Chinese and Asian fermented products. Wheat or barley and often peas are molded into large “bricks” for big qu and is the main saccharification-fermentation agent for sorghum-based baijiu. The bricks are made via milling of raw materials and then compressing into molds. The bricks are then placed in rooms for fermentation to occur under controlled conditions (with a wide range of temperatures used across the industry). Small qu is made from rice formed into small balls, and is used as the agent for most rice-based baijius. Some small qu producers incorporate medicinal herbs which affect their flavor. Qus provide a good bit of the flavor of baijiu indirectly as well as through the microbially directed metabolic reaction products produced. According to Sandhaus, a type of qu — bran qu, made from the outer layers of wheat or barley grains and also formed into bricks — is used to yield highly potent alcohol yields but lesser flavored products (6). Today, some baijius are produced via the use of incorporated cultivated cultures of microorganisms,including bacterial cultivation practices and the accrual of soil/mud-borne organisms acquired over many years of production. Further details on daqu production are available (4, 5, 8, 12, 17-20), with a nice schematic of daqu production in the review by Jin, Zhu and Xu (4).

The Origins of flavor and flavor profile descriptions. What adds to the nuances? As noted from above, a very com-

plex and time-consuming process is involved in the production of the various styles of baijiu. With all the raw materials used, the special microbiological and enzymatic properties of the varied types of daqu, the spontaneous inoculation of additional yeasts, bacteria and molds from mud pits, and the surroundings where baijiu is produced, and the reactions occurring during the fermentations, distillations, and aging, it can be seen how the complex flavor profiles associated with baijiu are developed. Daqu itself imparts a lot of chemical and biochemical flavor nuances (20) to the respective styles of baijiu, as do many steps from raw materials, including the quality of the water supply, through to final bottling and consumption. In wrapping up, a brief description of some of the key flavor molecules and their flavor descriptors is presented. See Table 2 for the key style profiles and Table 3 for a list of key flavor notes associated with each type. Baijiu is clearly differentiated from other liquors based on its distinctive flavor, taste, and production process (4, 8, and see 21). Each style has been the subject of extensive research and the focus of dozens of papers (a fuller set of references available from the authors upon request). More than 1,870 volatile compounds are now reported for baijiu (4, 5, 12, 21-23) including several hundred esters (often fruity accented compounds), more than 200 alcohols (with solventy, floral, honey, and other sweet and fruity notes), 140 ketones (solvent and buttery notes etc.), and around a hundred each of heterocyclic and nitrogenous compounds (with burnt, roasted, nutty notes from Maillard reactions). This also includes animalic, barnyard, and fecal notes, short and medium chain-length acids (cheesy, rancid, goaty, sweaty), aldehydes (green and woody-like nuances and strong fruity aromas like green and bruised apples), terpenes (think of hop and gin notes

here), sulfur compounds, including the group known as thiols (with often unpleasant tones; think burnt match, rotten egg, garlic and onion, and sewer-like notes, adding heat to the alcohol warmth, and also roasted sesame, potato, and other pungent notes), acetals (delicate green, floral, and strong fruity aromas) and lactones (think fatty/creamy peaches and coconut). Recently, a focus on baijiu flavor defects revealed off-odors which include bran-like, earthy-musty, rotten eggs, phenolic and mud-like (animal-horsey and fecal-like) (24). Adding to estery qualities is ethyl hexanoate (see flavor notes in Table 3). This ester exhibits a fruity, floral/sweet aroma and has apple-aniseed-like qualities. Its flavor/aroma potency comes through well in Chinese liquors, especially in strong-aroma type baijiu. Ethyl butyrate (arising from a combination of stinky/cheesy/ baby vomit-like butyric acid and ethanol acting as a solvent) and a host of other fruity esters convey tropical fruit/pineapple notes and much more. Ethanol and the higher alcohols (the fusel alcohols, like rubbing alcohol) also combine with many different acids to form fruity, waxy, and floral notes. Phenolic compounds — such as guaiacol and methyl and ethyl derivatives of it — delivering clove, smoky, spicy, bacon, and burnt nuances are also notes of value. The phenols known as cresols have been identified in Chinese liquors. Cresols found in peat, and thus conveying upon whiskies medicinal, coal-tar, and animal odors, may also contribute such flavors to the baijiu family of spirits. Furfurylthiol (sulfur compound -SH functional group) is a potent odorant in Chinese sesame-flavor baijiu. This compound along with other related aromatic thiols contribute roasted sesame, grapefruit, passion fruit and boxwood characters with thresholds for detection in the parts per trillion range. Soy sauce-aroma type baijiu is associated with some components conveying a key retronasal burnt flavor. Geosmin — a volatile microbial metabolite, which the brain interprets as an earthy odor (beetroot or musty-like) — has been noted (usually as an off-odor) in baijiu production. It is associated, in certain cases, with the microbiome of daqu starters. This shows a need to better understand the microbial community and biochemistry of the multiple organisms including bacteria, molds, and yeasts involved in Chinese baijiu liquor production. Thus, it should be apparent from above that to understand baijiu flavor requires quite the sensory vocabulary and intense sensory evaluation, which is why baijiu is described as an acquired taste to Westerners. Example baijius with some flavor notes are presented in the main book authored by Sandhaus (6). A listing of a few flavorful volatile components encountered in baijiu and in other spirits is provided in Table 3. Flavor descriptors can be found online, in the references cited here, and in a future article to appear in Artisan Spirit. This will have to suffice for now. However, the reader is also redirected to a single volume book containing five recently published major review chapters dealing with aroma and flavor chemistry of several types of baijiu (22). This volume and chapters provide a comprehensive overview and listing of earlier references to the subject. A future paper will attempt to provide a more comprehensive list of flavor descriptors to aid in your appreciation (or not) of such unique beverages. WWW.ARTISANSPIRITMAG.COM