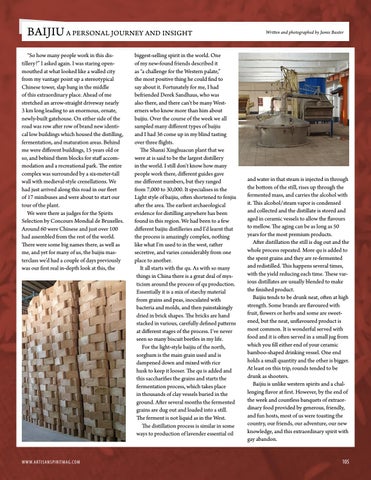 BAIJIU A PERSONAL JOURNEY AND INSIGHT “So how many people work in this distillery?” I asked again. I was staring openmouthed at what looked like a walled city from my vantage point up a stereotypical Chinese tower, slap bang in the middle of this extraordinary place. Ahead of me stretched an arrow-straight driveway nearly 3 km long leading to an enormous, ornate, newly-built gatehouse. On either side of the road was row after row of brand new identical low buildings which housed the distilling, fermentation, and maturation areas. Behind me were different buildings, 15 years old or so, and behind them blocks for staff accommodation and a recreational park. The entire complex was surrounded by a six-meter-tall wall with medieval-style crenellations. We had just arrived along this road in our fleet of 17 minibuses and were about to start our tour of the plant. We were there as judges for the Spirits Selection by Concours Mondial de Bruxelles. Around 60 were Chinese and just over 100 had assembled from the rest of the world. There were some big names there, as well as me, and yet for many of us, the baijiu masterclass we’d had a couple of days previously was our first real in-depth look at this, the

biggest-selling spirit in the world. One of my new-found friends described it as “a challenge for the Western palate,” the most positive thing he could find to say about it. Fortunately for me, I had befriended Derek Sandhaus, who was also there, and there can’t be many Westerners who know more than him about baijiu. Over the course of the week we all sampled many different types of baijiu and I had 36 come up in my blind tasting over three flights. The Shanxi Xinghuacun plant that we were at is said to be the largest distillery in the world. I still don’t know how many people work there, different guides gave me different numbers, but they ranged from 7,000 to 30,000. It specialises in the Light style of baijiu, often shortened to fenjiu after the area. The earliest archaeological evidence for distilling anywhere has been found in this region. We had been to a few different baijiu distilleries and I’d learnt that the process is amazingly complex, nothing like what I’m used to in the west, rather secretive, and varies considerably from one place to another. It all starts with the qu. As with so many things in China there is a great deal of mysticism around the process of qu production. Essentially it is a mix of starchy material from grains and peas, inoculated with bacteria and molds, and then painstakingly dried in brick shapes. The bricks are hand stacked in various, carefully defined patterns at different stages of the process. I’ve never seen so many biscuit beetles in my life. For the light-style baijiu of the north, sorghum is the main grain used and is dampened down and mixed with rice husk to keep it looser. The qu is added and this saccharifies the grains and starts the fermentation process, which takes place in thousands of clay vessels buried in the ground. After several months the fermented grains are dug out and loaded into a still. The ferment is not liquid as in the West. The distillation process is similar in some ways to production of lavender essential oil

Written and photographed by Jamie Baxter

and water in that steam is injected in through the bottom of the still, rises up through the fermented mass, and carries the alcohol with it. This alcohol/steam vapor is condensed and collected and the distillate is stored and aged in ceramic vessels to allow the flavours to mellow. The aging can be as long as 50 years for the most premium products. After distillation the still is dug out and the whole process repeated. More qu is added to the spent grains and they are re-fermented and redistilled. This happens several times, with the yield reducing each time. These various distillates are usually blended to make the finished product. Baijiu tends to be drunk neat, often at high strength. Some brands are flavoured with fruit, flowers or herbs and some are sweetened, but the neat, unflavoured product is most common. It is wonderful served with food and it is often served in a small jug from which you fill either end of your ceramic bamboo-shaped drinking vessel. One end holds a small quantity and the other is bigger. At least on this trip, rounds tended to be drunk as shooters. Baijiu is unlike western spirits and a challenging flavor at first. However, by the end of the week and countless banquets of extraordinary food provided by generous, friendly, and fun hosts, most of us were toasting the country, our friends, our adventure, our new knowledge, and this extraordinary spirit with gay abandon. 105