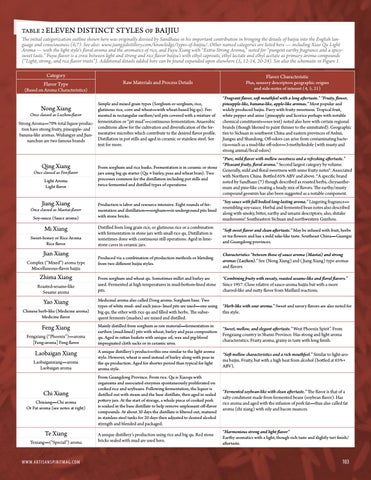 TABLE 2 ELEVEN DISTINCT STYLES OF BAIJIU The initial categorization outline shown here was originally devised by Sandhaus in his important contribution in bringing the details of baijiu into the English language and consciousness (6,7). See also: www.jiangjidistillery.com/knowledge/types-of-baijiu/. Other named categories are listed here — including Xiao Qu Light Aroma — with the light style’s floral aroma and the aromatics of rice, and Fuyu Xiang with “Extra-Strong Aroma,” noted for “pungent earthy fragrance and a spicysweet taste.” Fuyu-flavor is a cross between light and strong and rice flavor baijiu’s with ethyl caproate, ethyl lactate and ethyl acetate as primary aroma compounds (“Light, strong, and rice flavor traits”). Additional details added here can be found expanded upon elsewhere (5, 12-14, 20-24). See also the schematic in Figure 1. Category Flavor Type

From sorghum and rice husks. Fermentation is in ceramic or stone jars using big qu starter (Qu = barley, peas and wheat bran). Two processes common for the distillation including pot stills and twice fermented and distilled types of operations.

“Pure, mild flavor with mellow sweetness and a refreshing aftertaste.” “Pleasant fruity, floral aroma.” Second largest category by volume. Generally, mild and floral sweetness with some fruity notes*. Associated with Northern China. Bottled 65% ABV and above. *A specific brand noted by Sandhaus (7) though described as roasted herbs, chrysanthemum and pine-like creating a heady mix of flavors. The earthy/musty compound geosmin has also been suggested as a notable component.

Distilled from long grain rice, or glutinous rice or a combination with fermentation in stone jars with small rice qu. Distillation is sometimes done with continuous still operations. Aged in limestone caves in ceramic jars.

“Soft sweet flavor and clean aftertaste.” May be infused with fruit, herbs or tea flowers and has a mild sake-like taste. Southeast China—Guangxi and Guangdong provinces.

Produced via a combination of production methods or blending from two different baijiu styles.

From sorghum and wheat qu. Sometimes millet and barley are used. Fermented at high temperatures in mud-bottom-lined stone pits.

“Combining fruity with sweaty, roasted sesame-like and floral flavors.” Since 1957. Close relative of sauce-aroma baijiu but with a more charred-like and nutty flavor from Maillard reactions.

Medicinal aroma also called Dong aroma. Sorghum base. Two types of white mud- and each juice- lined pits are used—one using big qu, the other with rice qu and filled with herbs. The subsequent ferments (mashes) are mixed and distilled.

“Herb-like with sour aroma.” Sweet and savory flavors are also noted for this style.

A unique distillery’s product—this one similar to the light aroma style. However, wheat is used instead of barley along with peas in the qu production. Aged for shorter period than typical for light aroma style.

“Soft mellow characteristics and a rich mouthfeel.” Similar to light-aroma baijiu. Fruity, but with a high heat from alcohol (bottled at 65%+ ABV).

From Guangdong Province. From rice. Qu is Xiaoqu with organisms and associated enzymes spontaneously proliferated on cooked rice and soybeans. Following fermentation, the liquor is distilled out with steam and the base distillate, then aged in sealed pottery jars. At the start of storage, a whole piece of cooked pork is soaked in the base distillate to help remove unpleasant off-flavor compounds. At about 30 days the distillate is filtered out, matured in stainless steel tanks for 20 days then adjusted to desired alcohol strength and blended and packaged.

“Fermented soybean-like with clean aftertaste.” The flavor is that of a salty condiment made from fermented beans (soybean flavor). Has rice aroma and aged with the infusion of pork fat—thus also called fat aroma (zhi xiang) with oily and bacon nuances.