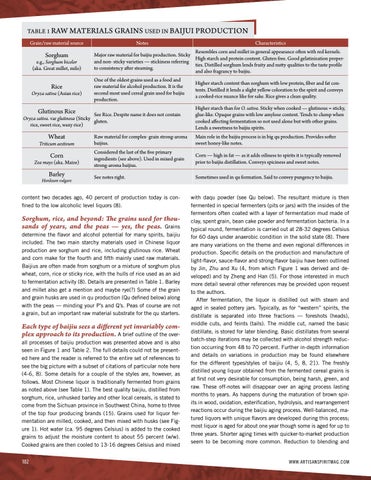 One of the oldest grains used as a food and raw material for alcohol production. It is the second most used cereal grain used for baijiu production.

Higher starch content than sorghum with low protein, fiber and fat contents. Distilled it lends a slight yellow coloration to the spirit and conveys a cooked-rice nuance like for sake. Rice gives a clean quality. Higher starch than for O. sativa. Sticky when cooked — glutinous = sticky, glue-like. Opaque grains with low amylose content. Tends to clump when cooked affecting fermentation so not used alone but with other grains. Lends a sweetness to baijiu spirits.

Considered the last of the five primary ingredients (see above). Used in mixed grain strong-aroma baijius.

Corn — high in fat — as it adds oiliness to spirits it is typically removed prior to baijiu distillation. Conveys spiciness and sweet notes.

content two decades ago, 40 percent of production today is confined to the low alcoholic level liquors (8).

Sorghum, rice, and beyond: The grains used for thousands of years, and the peas — yes, the peas. Grains

determine the flavor and alcohol potential for many spirits, baijiu included. The two main starchy materials used in Chinese liquor production are sorghum and rice, including glutinous rice. Wheat and corn make for the fourth and fifth mainly used raw materials. Baijius are often made from sorghum or a mixture of sorghum plus wheat, corn, rice or sticky rice, with the hulls of rice used as an aid to fermentation activity (8). Details are presented in Table 1. Barley and millet also get a mention and maybe rye(?) Some of the grain and grain husks are used in qu production (Qu defined below) along with the peas — minding your P’s and Q’s. Peas of course are not a grain, but an important raw material substrate for the qu starters.

Each type of baijiu sees a different yet invariably complex approach to its production. A brief outline of the over-

all processes of baijiu production was presented above and is also seen in Figure 1 and Table 2. The full details could not be presented here and the reader is referred to the entire set of references to see the big picture with a subset of citations of particular note here (4-6, 8). Some details for a couple of the styles are, however, as follows. Most Chinese liquor is traditionally fermented from grains as noted above (see Table 1). The best quality baijiu, distilled from sorghum, rice, unhusked barley and other local cereals, is stated to come from the Sichuan province in Southwest China, home to three of the top four producing brands (15). Grains used for liquor fermentation are milled, cooked, and then mixed with husks (see Figure 1). Hot water (ca. 95 degrees Celsius) is added to the cooked grains to adjust the moisture content to about 55 percent (w/w). Cooked grains are then cooled to 13-16 degrees Celsius and mixed

with daqu powder (see Qu below). The resultant mixture is then fermented in special fermenters (pits or jars) with the insides of the fermentors often coated with a layer of fermentation mud made of clay, spent grain, bean cake powder and fermentation bacteria. In a typical round, fermentation is carried out at 28-32 degrees Celsius for 60 days under anaerobic condition in the solid state (8). There are many variations on the theme and even regional differences in production. Specific details on the production and manufacture of light-flavor, sauce-flavor and strong-flavor baijiu have been outlined by Jin, Zhu and Xu (4, from which Figure 1 was derived and developed) and by Zheng and Han (5). For those interested in much more detail several other references may be provided upon request to the authors. After fermentation, the liquor is distilled out with steam and aged in sealed pottery jars. Typically, as for “western” spirits, the distillate is separated into three fractions — foreshots (heads), middle cuts, and feints (tails). The middle cut, named the basic distillate, is stored for later blending. Basic distillates from several batch-step iterations may be collected with alcohol strength reduction occurring from 48 to 70 percent. Further in-depth information and details on variations in production may be found elsewhere for the different types/styles of baijiu (4, 5, 8, 21). The freshly distilled young liquor obtained from the fermented cereal grains is at first not very desirable for consumption, being harsh, green, and raw. These off-notes will disappear over an aging process lasting months to years. As happens during the maturation of brown spirits in wood, oxidation, esterification, hydrolysis, and rearrangement reactions occur during the baijiu aging process. Well-balanced, matured liquors with unique flavors are developed during this process; most liquor is aged for about one year though some is aged for up to three years. Shorter aging times with quicker-to-market production seem to be becoming more common. Reduction to blending and