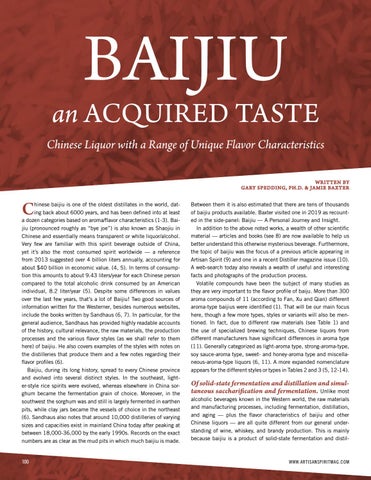 hinese baijiu is one of the oldest distillates in the world, dating back about 6000 years, and has been defined into at least a dozen categories based on aroma/flavor characteristics (1-3). Baijiu (pronounced roughly as “bye joe”) is also known as Shaojiu in Chinese and essentially means transparent or white liquor/alcohol. Very few are familiar with this spirit beverage outside of China, yet it’s also the most consumed spirit worldwide — a reference from 2013 suggested over 4 billion liters annually, accounting for about $40 billion in economic value. (4, 5). In terms of consumption this amounts to about 9.43 liters/year for each Chinese person compared to the total alcoholic drink consumed by an American individual, 8.2 liter/year (5). Despite some differences in values over the last few years, that’s a lot of Baijiu! Two good sources of information written for the Westerner, besides numerous websites, include the books written by Sandhaus (6, 7). In particular, for the general audience, Sandhaus has provided highly readable accounts of the history, cultural relevance, the raw materials, the production processes and the various flavor styles (as we shall refer to them here) of baijiu. He also covers examples of the styles with notes on the distilleries that produce them and a few notes regarding their flavor profiles (6). Baijiu, during its long history, spread to every Chinese province and evolved into several distinct styles. In the southeast, lighter-style rice spirits were evolved, whereas elsewhere in China sorghum became the fermentation grain of choice. Moreover, in the southwest the sorghum was and still is largely fermented in earthen pits, while clay jars became the vessels of choice in the northeast (6). Sandhaus also notes that around 10,000 distilleries of varying sizes and capacities exist in mainland China today after peaking at between 18,000-36,000 by the early 1990s. Records on the exact numbers are as clear as the mud pits in which much baijiu is made.

Between them it is also estimated that there are tens of thousands of baijiu products available. Baxter visited one in 2019 as recounted in the side-panel: Baijiu — A Personal Journey and Insight. In addition to the above noted works, a wealth of other scientific material — articles and books (see 8) are now available to help us better understand this otherwise mysterious beverage. Furthermore, the topic of baijiu was the focus of a previous article appearing in Artisan Spirit (9) and one in a recent Distiller magazine issue (10). A web-search today also reveals a wealth of useful and interesting facts and photographs of the production process. Volatile compounds have been the subject of many studies as they are very important to the flavor profile of baiju. More than 300 aroma compounds of 11 (according to Fan, Xu and Qian) different aroma-type baijius were identified (1). That will be our main focus here, though a few more types, styles or variants will also be mentioned. In fact, due to different raw materials (see Table 1) and the use of specialized brewing techniques, Chinese liquors from different manufacturers have significant differences in aroma type (11). Generally categorized as light-aroma type, strong-aroma-type, soy sauce-aroma type, sweet- and honey-aroma type and miscellaneous-aroma-type liquors (6, 11). A more expanded nomenclature appears for the different styles or types in Tables 2 and 3 (5, 12-14).

alcoholic beverages known in the Western world, the raw materials and manufacturing processes, including fermentation, distillation, and aging — plus the flavor characteristics of baijiu and other Chinese liquors — are all quite different from our general understanding of wine, whiskey, and brandy production. This is mainly because baijiu is a product of solid-state fermentation and distil-