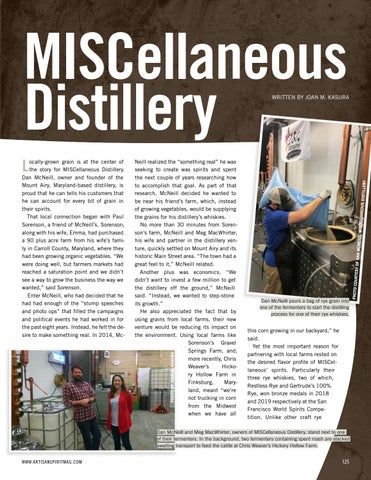 MISCellaneous Distillery Neill realized the “something real” he was seeking to create was spirits and spent the next couple of years researching how to accomplish that goal. As part of that research, McNeill decided he wanted to be near his friend’s farm, which, instead of growing vegetables, would be supplying the grains for his distillery’s whiskies. No more than 30 minutes from Sorenson’s farm, McNeill and Meg MacWhirter, his wife and partner in the distillery venture, quickly settled on Mount Airy and its historic Main Street area. “The town had a great feel to it,” McNeill related. Another plus was economics. “We didn’t want to invest a few million to get the distillery off the ground,” McNeill said. “Instead, we wanted to step-stone its growth.” He also appreciated the fact that by using grains from local farms, their new venture would be reducing its impact on the environment. Using local farms like Sorenson’s Gravel Springs Farm, and, more recently, Chris Weaver’s Hickory Hollow Farm in Finksburg, Maryland, meant “we’re not trucking in corn from the Midwest when we have all PHOTO BY JOAN M. KASURA

ocally-grown grain is at the center of the story for MISCellaneous Distillery. Dan McNeill, owner and founder of the Mount Airy, Maryland-based distillery, is proud that he can tells his customers that he can account for every bit of grain in their spirits. That local connection began with Paul Sorenson, a friend of McNeill’s. Sorenson, along with his wife, Emma, had purchased a 90 plus acre farm from his wife’s family in Carroll County, Maryland, where they had been growing organic vegetables. “We were doing well, but farmers markets had reached a saturation point and we didn’t see a way to grow the business the way we wanted,” said Sorenson. Enter McNeill, who had decided that he had had enough of the “stump speeches and photo ops” that filled the campaigns and political events he had worked in for the past eight years. Instead, he felt the desire to make something real. In 2014, Mc-

Dan McNeill pours a bag of rye grain into one of the fermenters to start the distilling process for one of their rye whiskies.

this corn growing in our backyard,” he said. Yet the most important reason for partnering with local farms rested on the desired flavor profile of MISCellaneous’ spirits. Particularly their three rye whiskies, two of which, Restless Rye and Gertrude’s 100% Rye, won bronze medals in 2018 and 2019 respectively at the San Francisco World Spirits Competition. Unlike other craft rye

Dan McNeill and Meg MacWhirter, owners of MISCellaneous Distillery, stand next to one of their fermenters. In the background, two fermenters containing spent mash are stacked awaiting transport to feed the cattle at Chris Weaver’s Hickory Hollow Farm. WWW.ARTISANSPIRITMAG.COM